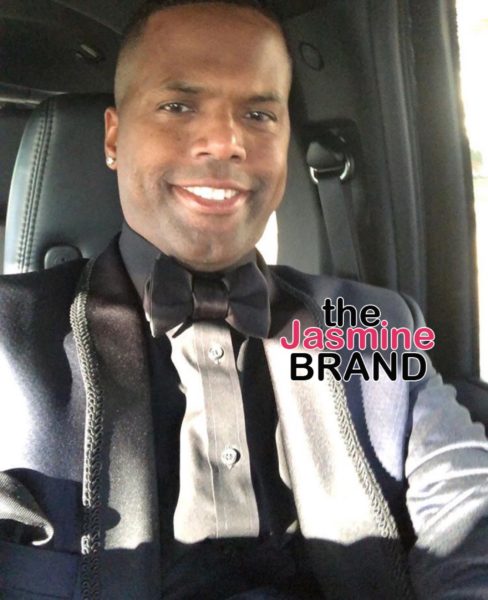 Former “106 & Park” host and current co-host on “Extra,” A.J. Calloway was accused of sexual assault in 2018 by an author named Sil Lai Abrams. While Abrams attempted to take Calloway to trial and share her story about the alleged sexual assault incident, she was faced with obstacles which eventually were used in efforts to silence her – she presumes.

Two more women have come forward claiming Calloway has assaulted them sexually in some way, according to the Daily Beast. One woman, who has chosen to remain anonymous, took her accusations to the police in West Orange, New Jersey on December 24, 2018. The woman claims when she initially told someone about her experience, they didn’t believe her. She moved forward with identifying Abrams and she says Abrams was the first person to believe her. Details about her accusations have not been released due to the nature of the ongoing case, but she is expected to be awaiting a contact from a local detective.

Following that, another woman who has been renamed as Talia is coming forward with her experience with Calloway, who she says, she originally met in 2011.

He started messaging me in 2011. He wanted to take me out to dinner and I kept telling him no, I wouldn’t entertain his advances. After him asking me out repeatedly I agreed to go, because it got to a point where he started to get upset that I was actually not willing to go out with him. He was kind of like, do you know who I am?

Talia – who was in her early twenties at the time – and Calloway – in his late thirties at the time – finally went out. She says Calloway then took her back to his home, after he invited a few friends over for a party; directing them to leave their belongings in the kitchen, and moved the party to a lower part of his home. Around 3 AM, Talia recalls Calloway walked his guests to the door as they were exiting and returned to her. She said,

We started making out. And I knew I wasn’t having sex—I knew adamantly I wasn’t having sex because I won’t have sex unless I’m in a committed relationship. So, you know, even though I’m kissing him, I’m thinking, this is the first date, we’re just making out a little bit—because I’ve never even had sex on the first night with someone.”

Sharing how Calloway allegedly attempted to constantly lift up Talia’s skrit, after she refused. Talia states this went on for 40 minutes.

I just remember trying to push him off of me, and this went on for 40 minutes straight. Me attempting to push him off of me and fighting to keep him from taking my clothes off. Eventually he got tired, and I think it’s because he was so intoxicated—it was wearing him out. And I just remember him pulling his penis out and he began stroking himself and he kept trying to put my hand on his penis and eventually he ejaculated on my hands.

Since Calloway’s name has been placed in the pool of alleged abusers, he has denied claims. Last June, the host said,

Journalist Jamilah Lemieux came forward on Friday (Jan. 4), with statements of support, as she claims she had a friend who was close to participating with Calloway on an alleged sexually non-consenting level.

I had to get a clearly too-intoxicated-to-consent friend away from AJ at a party once. I’ve heard @Sil_Lai speak about her story for years. I believe every word of this. 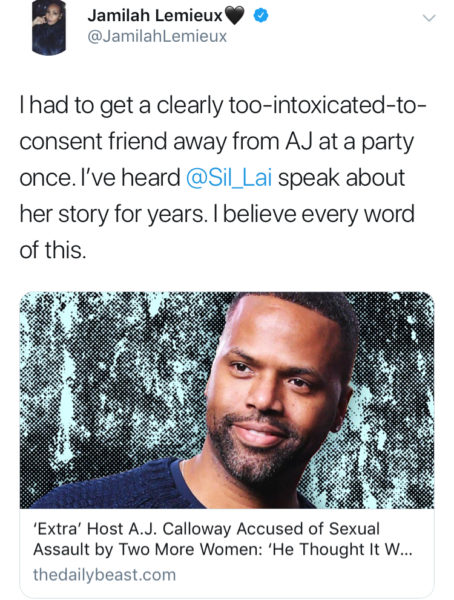 Calloway has yet to respond new claims of assault. 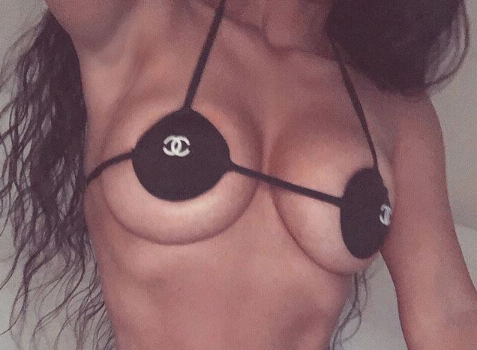 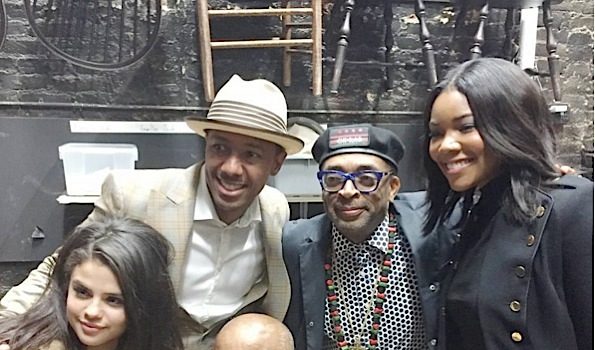