Art may not imitate life in Omari Hardwick‘s case, but the actor wants social media trolls to know he isn’t above his “Power” role’s tactics.

It’s been just under two weeks since the hit Starz series ended, and fans are accusing Omari Hardwick of going through Ghost withdrawals! He quoted the poem, “Invictus,” by William Ernest Henley in his latest Instagram post:

“Out of the night that covers me,
Black as the pit from pole to pole,
I thank whatever gods may be
For my unconquerable soul.
In the fell clutch of circumstance
I have not winced nor cried aloud.
Under the bludgeonings of chance
My head is bloody, but unbowed.
Beyond this place of wrath and tears
Looms but the horror of the shade,
And yet the menace of the years
Finds and shall find me unafraid.
It matters not how strait the gate,
How charged with punishments the scroll,
I am the master of my fate,
I am the captain of my soul.”” 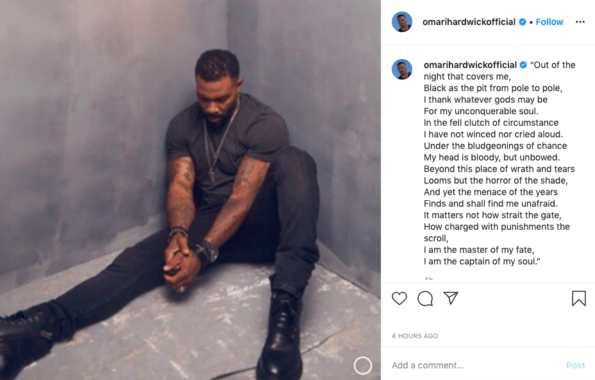 But things took a turn for the worst with this exchange:

“@tristian_jaking: We want ghost f*ck what you talking about

@omarihardwickofficial
@tristian_jaking i am ghOst. I am first O. I am everything. You want ghost cuz i put me in him” 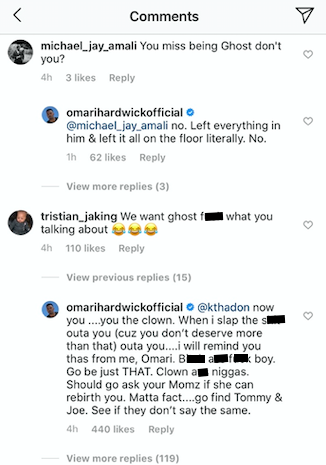 “@kthadon @tristian_jaking honestly I agree holy s*** .. he was kool until I hear him in real life .. matter fact where’s tommy

@omarihardwickofficial @kthadon now you ….you the clown. When i slap the sh*t outa you (cuz you don’t deserve more than that) outa you….i will remind you thas from me, Omari. B*tch a** f*ck boy. Go be just THAT. Clown a** n*ggas. Should go ask your Momz if she can rebirth you. Matta fact….go find Tommy & Joe. See if they don’t say the same.”

Oop! Do you miss Omari Hardwick as Ghost? Let us know in the comments.