theJasmineBRAND.com exclusively reports, Mathew Knowles is denying he hid profits from an auction he put on selling his daughter Beyonce’s memorabilia, with the mega star’s father blasting his former lawyers and counter-suing the law firm for $250k+ in damages for spreading the lie about him profiting off his famous offspring.

Here’s the latest:  Knowles is counter-suing his former lawyers accusing them of lying about him selling his daughter Beyonce’s memorabilia.

He denies the allegations he defrauded the law firm out of $50k. Further, he says the plaintiffs are the ones who breached their deal, NOT him.

Knowles accuses them of trying to maximize their fees but doing minimal work on his case. He believes they are liable to him for damages for their work. He claims the firm was ineffective and overcharged him for the work performed.

Beyonce’s dad then counter-sued the firm saying they are outright lying about him hawking Beyonce and Destiny’s Child memorabilia and hiding the profits from the auction to keep it away from his
creditors. He is seeking $250k from his former lawyers in damages.

However, they accuse him of refusing to pay up on the invoice for their services. As of now, there remains due a total of $49,120.35.

The firm explains they have demanded payment numerous times, but he has yet to pay them. The lawsuit accuses Knowles of fraud due to him promising to pay for the work but then not paying.

The firm accuses him of disposing of the money he pulled in from the auction to avoid debts and legal obligations such as their invoice. They are suing for the unpaid balance plus punitive damages. 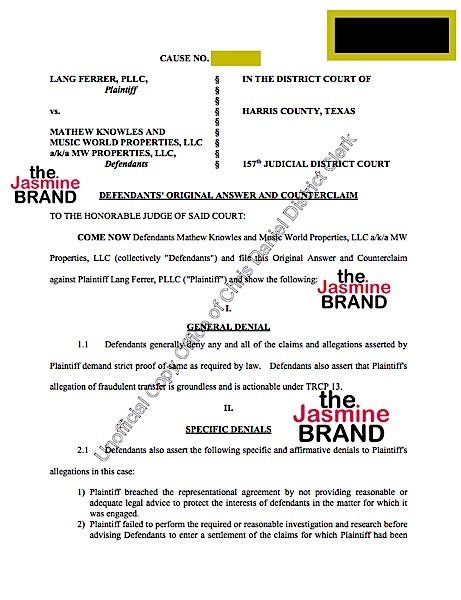