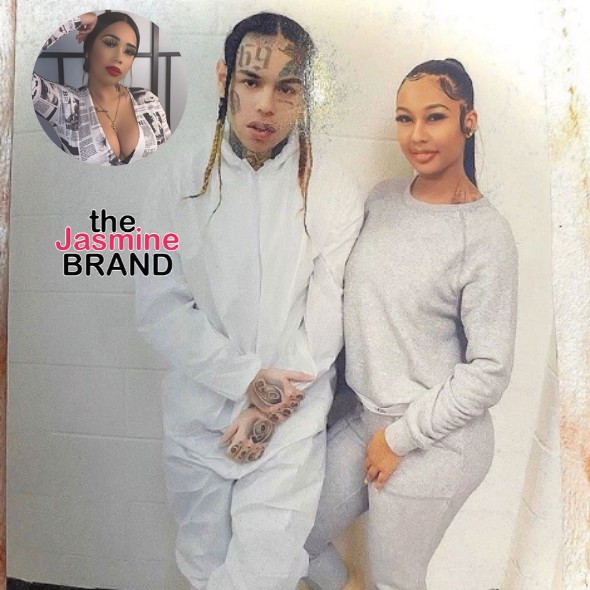 Incarcerated rapper Tekashi 6ix9ine‘s girlfriend, Jade, is still riding for him while he serves the rest of his sentence. 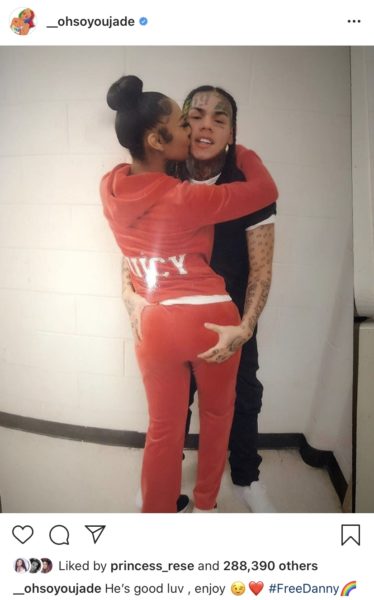 But in an updated Instagram post with her and Tekashi’s most recent visitation photo, Jade also called out his baby mama, Sara Molina, out. Yikes! Jade’s encouraging post to her man read:

“@__ohsoyoujade They kidnapped you , they had sex with the mother of your child , they get caught on the phone trying to kill you & their stealing millions of dollars from you . If you snitch , for the rest of your life people are gonna try to kill you for being a rat but if you don’t snitch , you’re doing 47 years in prison where they’re gonna kill you anyway because they were already talking about it . Sammy the Bull kills 19 people and gets 5 years . You kill no one and gets 2 years . This sh*t is so f*cked up ….”

“LMFAOOO they can’t break you , no one understands why people still love you and support you . 13X PLATINUM 8X GOLD AND YOU HAD NO FRIENDS IN THIS INDUSTRY TO START OFF YOUR CAREER YOU TOLD EVERYONE SUCK YOUR D*CK !!! THEY KNOW THE INTERNET HASN’T BEEN THE SAME SINCE YOU LEFT I LOVE YOU BABY #FREE YOU” 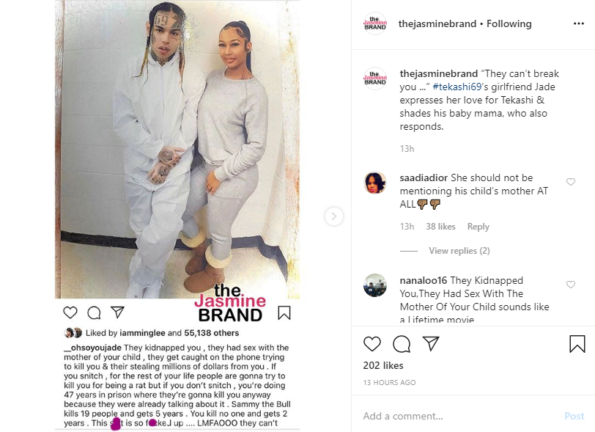 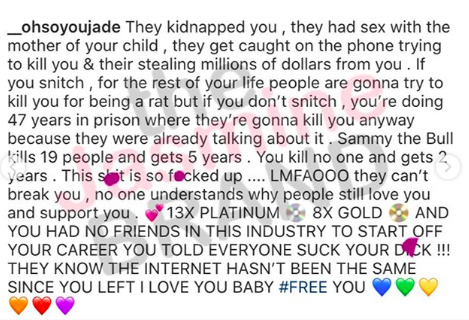 Sara Molina caught wind of the message and clapped back at Jade.

“B**** don’t mention me if you ain’t gonna see me. You’re weak asf, imagine sleeping with a n***a, while he still with his baby moms, ENDING UP WITH THE N***A, BUT YOU STILL MENTIONING ME FOR WHAT. He not even hugging you or kissing you boy look like he’s dying inside standing right next to you. You the only one that looks happy dummy” 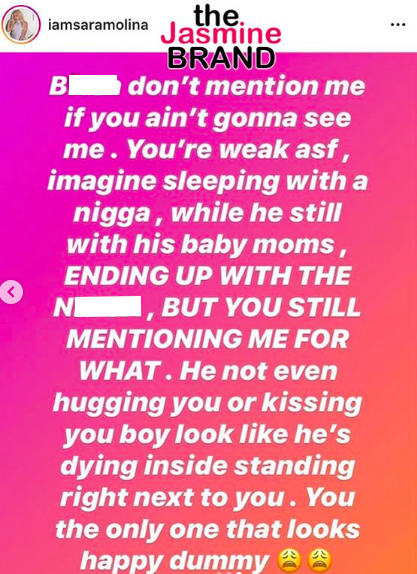 She also let fans and memes do some of the talking for her. In response, Instagram user @lexxlaflare reposted Jade’s message to her IG Story with the following caption:

“her caption was so unnecessary. like tf just post the picture and shutup. and leave @iamsaramolina out of it” 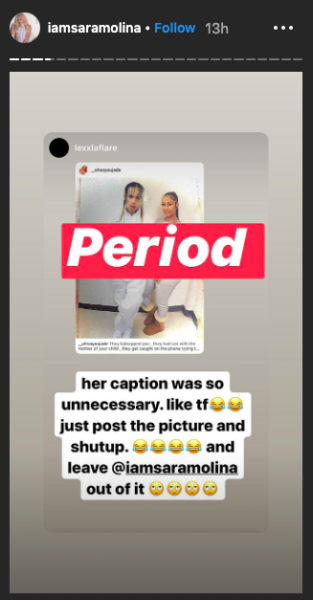 Her next subliminal message read:

“I wonder what my “Here go his bm right here”, picture is…What pic ya b*tches be showing?” 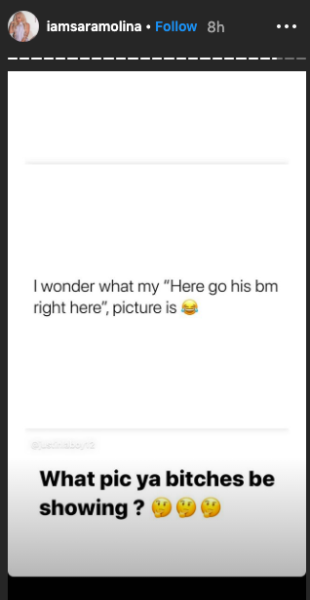 Do you think both parties will come to a resolve when Tekashi 6ix9ine is released? Let us know your thoughts in the comments. 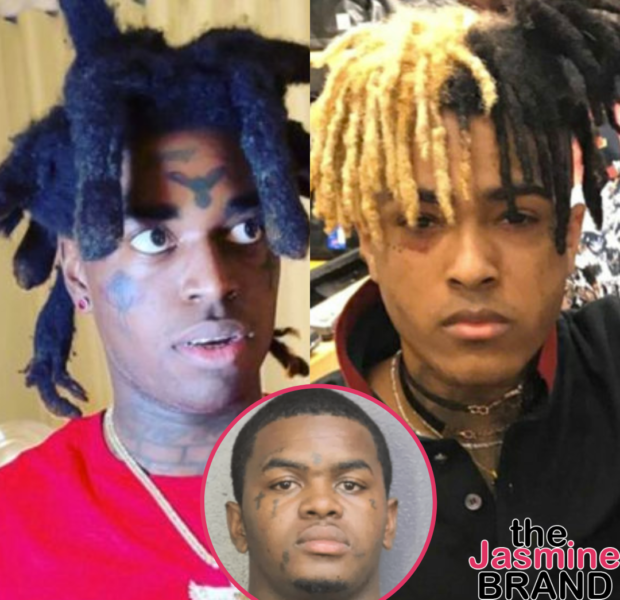 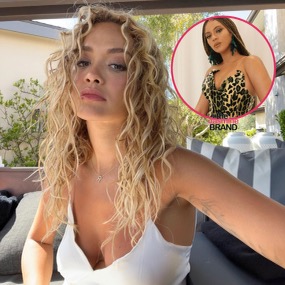 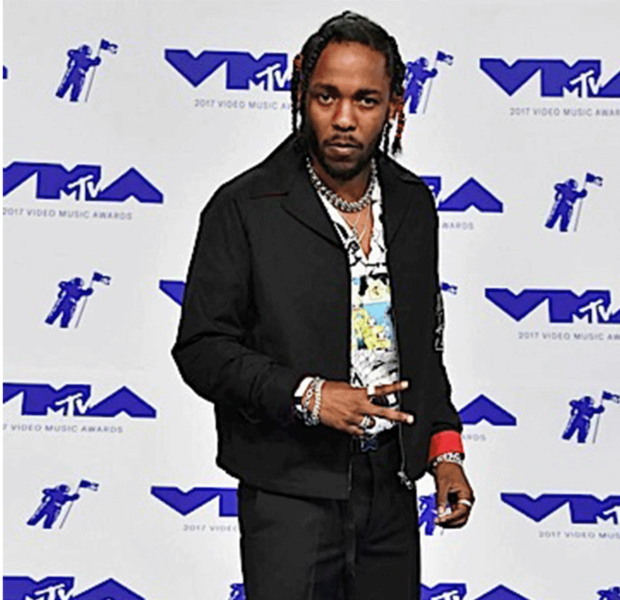 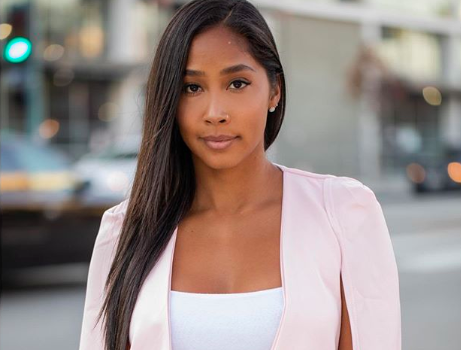 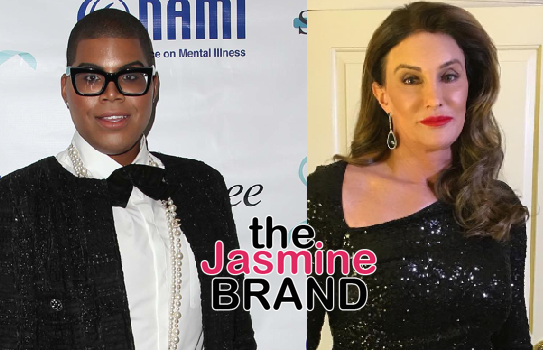