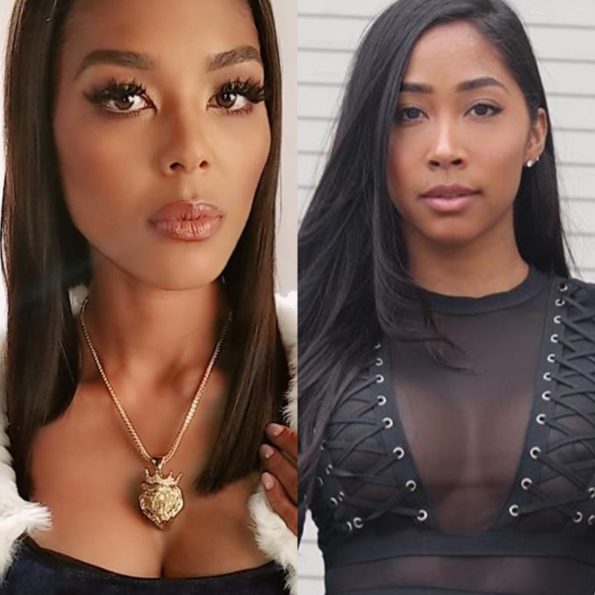 Does Moniece Slaughter raise a valid concern, or should she bump, bump, bump out of her baby daddy’s business? She and her former “Love and Hip Hop Hollywood” co-star, Apryl Jones, recently engaged in a public tiff about Apryl’s alleged new relationship with Moniece’s ex, B2K member Lil Fizz. This comes as a shock to reality TV fans, due to the fact that both ladies have children with members of the early 2000s-boy band. Moniece and Lil Fizz share a son named Kameron, while Apryl and Omarion have son Megaa, and daughter A’Mei.

News of the shocking feud started with an Instagram post from Moniece about her new beau. His caramel-colored hand is pictured, in which many fans thought was Moniece’s ex, Fizz. Her loving caption to her anonymous friend read:

“@moniece_slaughter For the past year and a half, you’ve been consistent. Even when I wasn’t. I’ve cried. I’ve cursed my face off. I’ve shared blissful moments with you when I thought I was at my happiest. You’ve been a shoulder to cry on. Even in the midst of your own storm. You checked on me when too much time passed that you didn’t hear from me. You provided a judgement free zone. Never criticized me or made me feel crazy through my ups and my downs. Instead, you offered empathy. Patience. And understanding. A true friend. And I cherish every moment. I just wanted to say thank you for helping me see my worth when I was at my lowest. For encouraging me not to give up on the idea of loving the next person that enters my life. Constantly reminding me not to be too hard on myself. Supporting my every career move. From tears of doubt to tears of joy. You’re the best friend a girl could hope for. I appreciate you for staying solid through the most fluid time in my life. They say you know who your true friends are when you go through your darkest times. You were there holding my hand. So for that. I’m forever Indebted to you. And to show my gratitude, I promise to be just as good to you, as you’ve been to me. And I’ll hold your hand through every trial & tribulation. Helping you over every obstacle. #youknowwhoyouare” 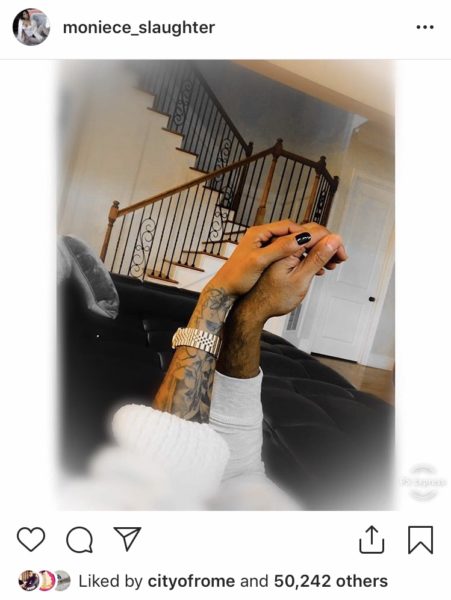 In the comment section, fans speculated about whether or not the hand belonged to Lil Fizz. Moniece informed of us the status of their relationship, and hinted at Fizz and Apryl with this comment: 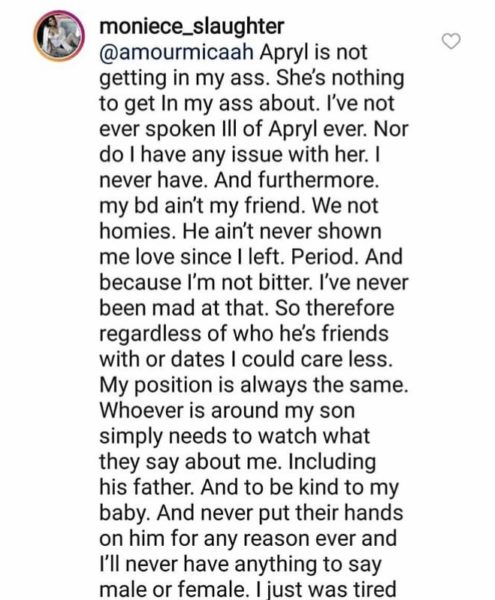 Oop! From there on, she and Apryl Jones decided to publicly discuss their differences on Instagram Live. The banter came to nearly no resolve. This is how their conversation followed:

“Moniece Slaughter: My mom hit me and was like, ‘Yo, where’s Kam? I said, ‘I just got a hold of him and he said he was in Chicago. When he went to the kitchen he was with Megaa and Apryl. This is post-Kameron coming to me and saying- and my mom. He was saying, ‘I know Mommy doesn’t like it when I’m with Megaa and A’mei.’ And I said, ‘Who said that, Kameron? Because when you told me you spent the night at Apryl’s house, my only question was ‘Is she nice to you? Apryl’s always been nice to me’…and you told me, ‘Yes.’ My whole family was at the dinner table, bro. We were all looking around like, ‘Where does this come from?’

Apryl Jones: But you’re making it so elaborate, Moniece. So you’re upset about Fizz, and you’re throwing it into this situation?

Apryl: So what are you upset about with him, or what this has to do with me ?

Moniece: He has actually taught my son to keep secrets, and that’s what me and my family don’t like.

Apryl: What does that have to do with what we’re talking about? You’re throwing in some elaborate thing that I have nothing to do with!”

What do you think about Moniece Slaughter’s commentary on Lil Fizz’s and Apryl Jones’ alleged relationship? 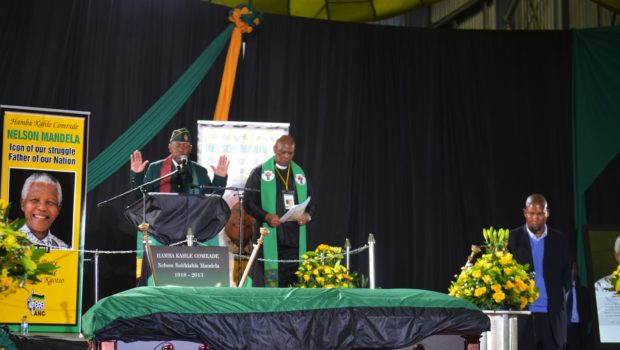