Christopher Darden’s daughter, Jeneé Darden, wants the public to know she has nothing to do with her father representing Eric Holder, the man charged with shooting and killing Nipsey Hussle, in court.

This will be Darden’s second high-profile case as he was on the prosecuting side of the infamous O.J. Simpson trial in 1995. Simpson was accused of brutally killing his wife, Nicole Brown. Darden’s daughter said she was one of many who was shocked at his decision to serve as Holder’s lawyer in his upcoming trial.

“I’ve been receiving vile comments and messages since news broke that my father, Chris Darde, is the defense attorney for the man accused of killing Nipsey Hussle. Like many of you, I found out about my father’s involvement in the case while scrolling through social media. I was not prepared for this backlash that has triggered bad memories from the O.J. Simpson Trial. My father is a grown man and has been a defense attorney for some time. I have no say in the cases he takes on.

LA is like a second home to me. I grew up in a community similar to Nipsey’s and was saddened by news of his death. So I understand why it hurts deeply when we lose young, talented Black men like him who are committed to empowering people.

Instead of attacking me and others who have nothing to do with this case, channel that energy toward continuing Nipsey’s legacy in strengthening our communities and uplifting each other. Thank you tot hose who have been supportive of me. I don’t know how this will all play out, but I will continue to pray for Nipsey Hussle’s family. May they have peace and justice. Jeneé Darden” 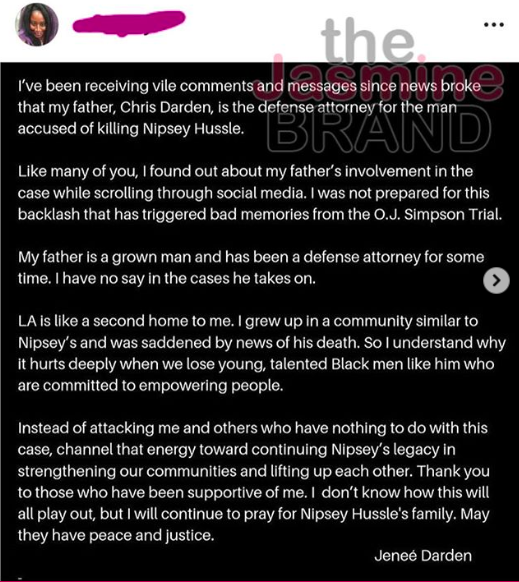 Interestingly enough, Jeneé shared her condolences for Hussle’s longtime girlfriend, Lauren London on social media after his passing was confirmed. 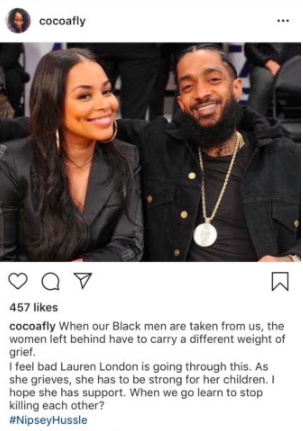 She told one fan her message is still the same, despite finding out about her father’s representation for Holder. 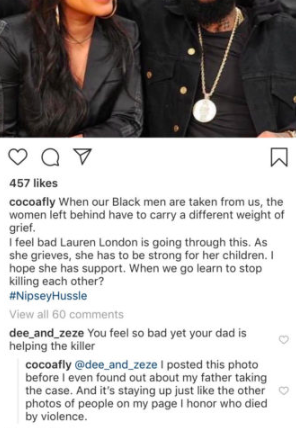 News broke Friday that Darden would be representing Holder, who allegedly shot and killed Hussle outside of his South Los Angeles store, The Marathon.

Holder has officially been charged with murder, attempted murder (for allegedly injuring two other men in the shooting) and being a felon carrying a firearm. Darden and Holden made their debut in court as Darden entered a not-guilty plea for Holder.

What are your thoughts on Jeneé Darden’s statement? Tell us in the comments.

Tyrese Is Sorry For Trashing Women: My delivery was f*cked up!