Cardi B has never been shy to let the press know when they’ve upset her, and this time around was no different. An image of a paparazzi photo of Cardi B (real name Belcalis Almanzar) shopping came out recently, and in a now-deleted Instagram post, the 27-year-old addressed the photo being altered by uploading a side-by-side comparison to the original image next to one she said was photoshopped. Cardi B added the caption:

“Its the fact that people try to photoshop my face and body to post on their platform so people can bash me and make me feel down on my appearance on purpose….” 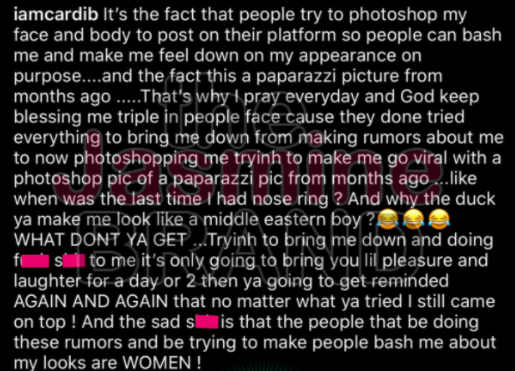 “Like when was the last time I had a nose ring? And why the duck do ya make me look like a middle eastern boy? WHAT DONT YA GET… Trying to bring me down and doing f*ck sh*t to me its only going to bring you little pleasure and laughter for a day or 2 then ya going to get reminded AGAIN AND AGAIN that no matter what ya tried I still came on top ! “

She also expressed her disdain at the fact that it’s mostly women who try to generate bad press for her.

“And the sad s*** is that the people that be doing these rumors and be trying to make people bash me about my looks are WOMEN !”

What do you think about Cardi B’s remarks? Let us know in the comments below!