Cardi B is issuing an apology after she was called out for alleged cultural appropriation in a Reebok advertisement.

After the ad was released, some fans on social media said Cardi B was appropriating Hindu culture.

Not a Hindu but I think Cardi B is lowkey being disrespectful pic.twitter.com/Thi0Zmi7C3 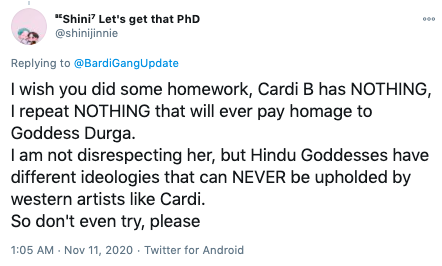 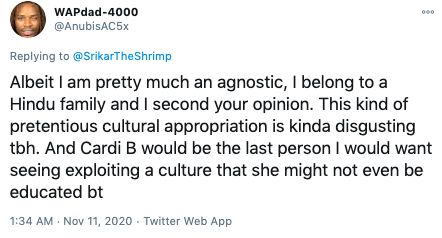 Cardi B has since taken to Instagram to apologize. She explained in a video:

‘When I did the Reebok shoot the creative told me I’d be a goddess that represents strength, femininity, and liberation, and that is something I love, that I’m all about and I thought it was dope. “

“If people think I offended their culture or religion I want to say I’m sorry – that was not my intent. I would not want anyone to disrespect my religion, with people dressed as the Virgin Mary or Jesus, as long as they do it in a beautiful and graceful  way.”

“Maybe I should’ve done my research. I’m sorry. I can’t change the past but I’m gonna do more research for the future.”