It looks like Megan Thee Stallion’s label and management team will be coming to an agreement soon.

At the same time, her record label, Carl Crawford’s 1501 Certified Entertainment, which she signed with in 2018, inked a deal with J. Prince. 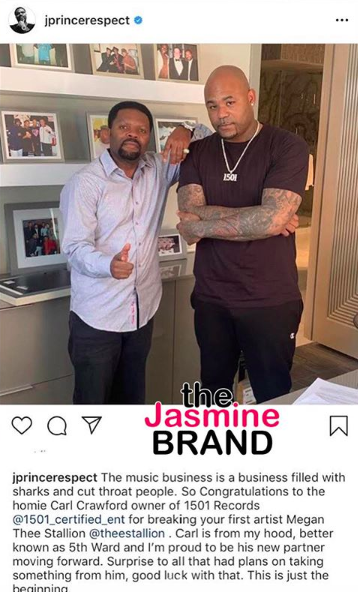 She also sued for $1 million and was granted a temporary restraining order that let her drop new music.

J. Prince has now said in a recent interview that 1501 and Jay-Z will be meeting within the next few days.

“Thanks to the homie Jay-Z…because he and I are about to close that. I’m hoping that we close this week.”

“In the beginning, some things that’s facts where independent labels are concerned. When we ignite and start movements, and it’s been going on since back in the day and probably before me, the majors will come in and try to take your s—. That’s just how it go… Clearly, that’s what was trying to take place where he was concerned. I couldn’t allow it to happen on my watch. We was able to balance that scale and let one know that the homie [Carl Crawford] deserves to be compensated for the risk and different things he took.”

What are your thoughts on Jay-Z and 1501 coming to an agreement? Comment and let us know!