Nick Gordon, the ex-boyfriend of singer Whitney Houston’s late daughter was reportedly found unresponsive in a central Florida hotel room on Thursday (Jan. 1st). According to reports, Nick Gordon is said to have been rushed to the hospital in Florida after having a series of heart attacks from a suspected drug overdose. According to reports, the alleged drug was heroin. Nick Gordon was later pronounced dead at Altamonte Springs Hospital.

On Thursday (Jan. 2nd), more details were released,  including the 911 call made to dispatchers after Gordon was found. On the audio, the 911 dispatcher is heard saying the

“caller advised, black stuff is coming out of his mouth and he is not breathing.”

Gordon’s death comes nearly five years after the tragic death of his ex, Bobbi Kristina Brown who was found unresponsive in a bathtub in January 2015.

The 22-year-old died after six months in a coma. Her mother, Whitney Houston, also died after being discovered unresponsive in a bathtub in February 2012.

Soon after Gordon’s death, his brother, Jack Walker Jr., took to Facebook by sharing a series of throwback photos of the pair from their childhood days to adulthood. Walker wrote,

“I love you so much big brother I hope you heard me talking to you at your bedside you are with me and I can feel it I love you I love you I love you watch over me and your nieces shit wasn’t suppose to go like this I talked to 6 hours before all this started you gave me my nickname Lil Wop and that Will forever be what I go by , you we’re best friend and I never in a million years thought I’d be writing this for my ACE I was there through every step we all love you no matter what and we’ll all stay strong for you , New Years didn’t have to start like this and you just told me you HAD to see me for New Years but I’m blessed I got to talk to you last night you will forever be my best friend nobody will ever take your place.” 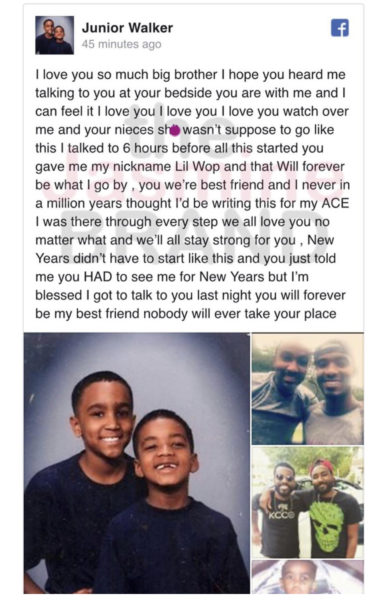 Continued prayers for Nick Gordon’s family, friends and loved ones!

XXXTentacion Murder Suspect Dedrick Williams Pleads To Be Released From Jail Due To COVID-19: I Have A Weak Immune System
Exclusive
Post Slider