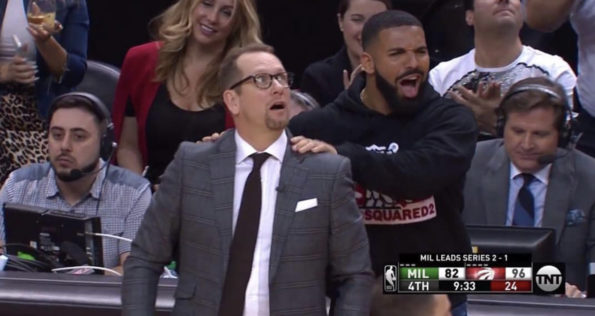 Rapper Drake goes hard for his hometown, including his beloved Toronto Raptors whom are in a heated NBA playoff Eastern Conference Finals match-up against the young and talented Milwaukee Bucks. As one of the Raptors team ambassador, Drake, 32, may have rubbed the Bucks head coach, Mike Budenholzer, along with several NBA fans, the wrong way following a moment were the rapper was seen at one point rubbing Toronto coach Nick Nurse’s shoulders. During the game, the Grammy winner paced the sidelines, celebrating and laughing at Bucks’ star center, Giannis Antetokounmpo when he missed a free throw. Bucks‘ coach Budenholzer suggested Drake was receiving special treatment while pointing out there should be boundaries  for fan on the sidelines. He says,

.@Drake was far from emotionless in the @Raptors' Game 4 victory! ? pic.twitter.com/SsbNm0imRq

“I will say, again, I see it in some timeouts, but I don’t know of any person that’s attending the game that isn’t a participant in the game a coach — I’m sorry, a player or a coach, that has access to the court. I don’t know how much he’s on the court. It sounds like you guys are saying it’s more than I realize. There’s certainly no place for fans and, you know, whatever it is exactly that Drake is for the Toronto Raptors. You know, to be on the court, there’s boundaries and lines for a reason, and like I said, the league is usually pretty good at being on top of stuff like that.”

“Imagine a gig & an athlete on VIP seats, right next to the band, stands up on the stage just to show off during the entire game, knowing cameras are on him, occasionally even massaging the singer. Security and him both allow it. Never seen anything as disrespectful as this before,” he wrote in a since-deleted tweet.

Drake appeared to respond to the criticism he was receiving. He shared of a photo of himself getting hyped up on the sideline pressing the like button on a comment which is in reference to Bucks coach’s comments. The comment says,

“Sports media needs to accept the simple rule the Miami Hurricanes signed into law back on the 80s: if you don’t want the opposing team to celebrate and dance, prevent them from scoring, winning or achieving their objective. Get over it and keep moving.” 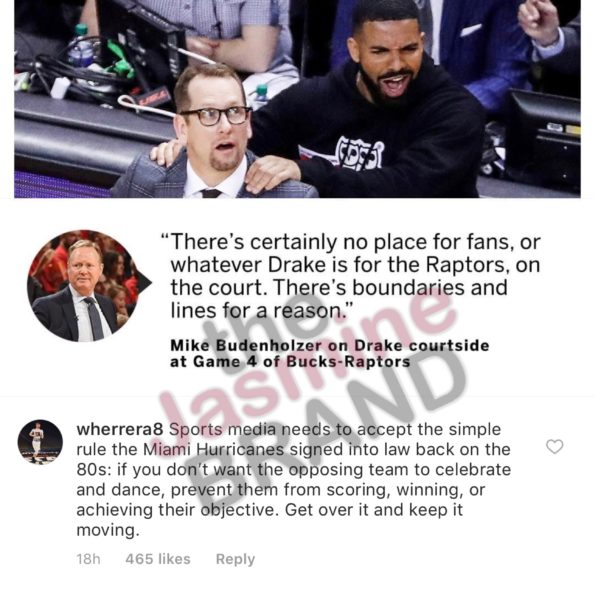 What are your thoughts on this? Let us k now in the comments.
Tags: basketball, Bucks, Drake, nba, recommend, Toronto Raptors
Tweet Like Plus Pin It Share