Tamar Braxton is quarantined with her son, Logan, and her boyfriend David Adefeso amid the coronavirus outbreak – but the show must go on! She updated fans on how she’s spending her time in isolation, as well as her next career moves during her latest “Tamar Takes” webisode. David Adefeso and Tamar Braxton discuss how the lockdown has improved their relationship and the predicted coronavirus baby boom:

“David Adefeso: This lockdown is doing some wonders

Tamar Braxton: Won’t he make a way out of no way? Won’t he come through and give you what you need?

David: We’ll have some coronavirus babies after nine months!

David: We can fix that real quick!” 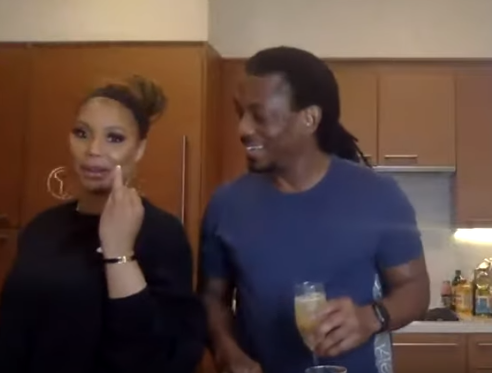 Tamar Braxton touched on letting go of past beefs and negative energy. Perhaps, she’s referring to tagging her former co-host from “The Real” – Adrienne Bailon-Houhgton – in an Instagram challenge:

“I know you guys saw my post this week on Twitter, and I know people thought, ‘Oh, Tamar’s having another transformation! Tamar’s having another come to Jesus!’…what I will say about not just that situation but every situation – I am not giving any negative energy to anything. Nothing that doesn’t take me higher; nothing that doesn’t make me feel good when I wake up in the morning; nothing that doesn’t make me feel like I’ve made a difference in somebody’s life in the most positive way – I want nothing to do with. At this point of time in my life, it doesn’t matter what you’ve done to me or what I’ve done to you- I just don’t want no enemies. I just don’t want that kind of negative energy out there like that.”

“Toni Braxton is doing amazing. She calls me 715,000-zillion times a day, and I’m here for it. We’re not quarantining together, and I wish she was.”

This, of course, comes after their brief masked hang-out session.

@tamarbraxton completely RUINED quarantine break sister day…she didn’t have a mask or gloves and she wanted to use ALL OF MY @unclebuds_hemp HAND SANITIZER but no my sista ya gotta get ya own! unclebudshemp.com

The Grammy-nominated vocalist even shared her top R&B favorites of all-time:

“The Queen of the throat Whit! [Whitney Houston] And Mariah Carey- so that’s two. Beyonce- I love her slow songs. I just found out she always, like no matter what kind of genre she’s doing – when she’s doing a slow song, she always bodies R&B. And I appreciate that about her. I really love Bran- [Brandy] I can’t keep it to five. KeKe Wyatt is one of my favorites. Tamia- another favorite of mine.”