Singer Ari Lennox appears to be having a little regret. She posted a throwback photo of herself on Instagram and reminisced on simpler times and the days before her fame. In a recent post on Instagram, the singer posted a photo of her younger self with the caption,

“Man I wish I could start over. Go back to this girl. Wish I never showed the world my personality. Wish I never did an ig live. Wish I wasn’t so naive. Wish I never loved as hard as I do. Wish I was smarter. Honestly wish this was a world where you could be free and not judged. Where you could speak your mind and people understand context without tearing down people. Me opening up myself to the world has only damaged my career but realistically how many people really vouching for soul in mainstream? I felt my personality helped but it hasn’t. 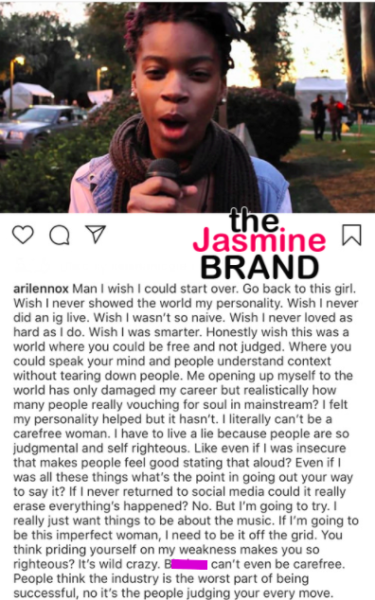 I literally can’t be a carefree woman. I have to live a lie because people are so judgmental and self righteous. Like even if I was insecure that makes people feel good stating that aloud? Even if I was all these things what’s the point in going out your way to say it? If I never returned to social media could it really erase everything’s happened? No. But I’m going to try. I really just want things to be about the music. If I’m going to be this imperfect woman, I need to be it off the grid. You think priding yourself on my weakness makes you so righteous? It’s wild crazy. Bitches can’t even be carefree. People think the industry is the worst part of being successful, no it’s the people judging your every move.”

She seems to be in different spirits since the last time she made headlines. Earlier this month, she shared her epic lace front struggles as she attempted to try something new with her hairstyle. The “BMO,” singer hilariously placed the wig on top of her head and things then turned for the worse. 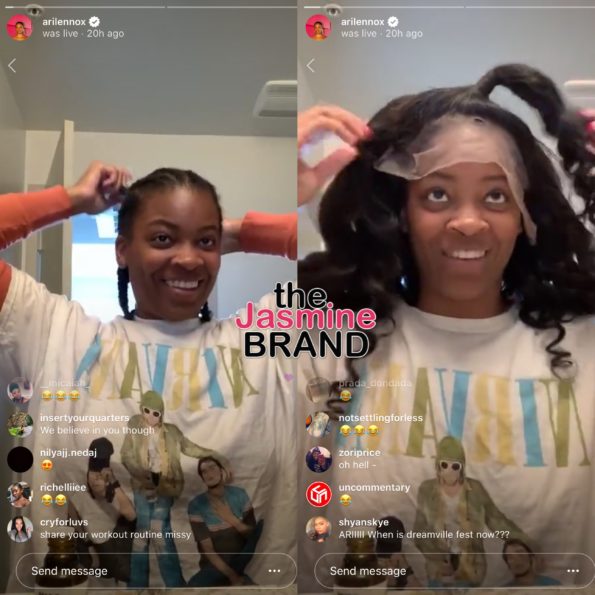 The IG live with the lace front is just one example of how Ari Lennox has expressed herself openly with her fans. Back in March, she took to her Instagram live to reveal how sexy she felt in her new Ivy Park Adidas collection one-piece suit. Ari said,

“Oh! Thank you Beyonce! I don’t know if you did this for me on purpose but you made me feel like a real sexy b*tch.”

“My p*ssy is out for you. Thank you so much sister.”

Ari also reveals she and Beyonce have already met years ago as a child.

“I hope to meet you as an adult, I meet you when I was little. I love you so much.” 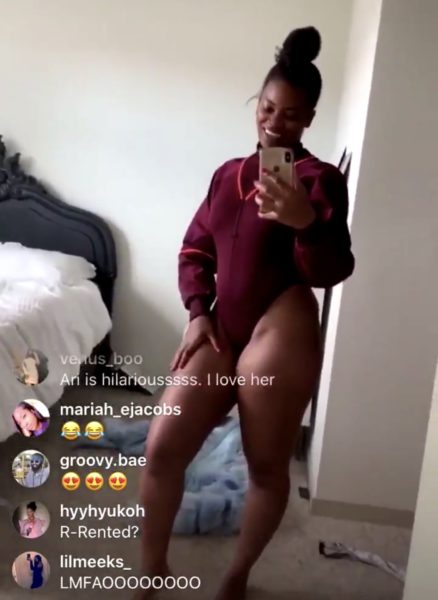 She ended the live saying,

“Aight, I’m inspired. I’m definitely going to start working out because Beyonce makes me feel like all things are possible.”

What do you guys think about Ari Lennox’s latest reflections on Instagram? Tell us your thoughts in the comments below.

Method Man’s Wife Calls Wendy Williams A “Miserable B*tch”, As She Reacts To Talk Show Host Claims Of One Night Stand – She’s Obsessed With Our Lives!

Summer Walker Defends Not Hugging Fans During Meet & Greet: That Transference Of Energy Would Literally KILL Me
Exclusive
Post Slider