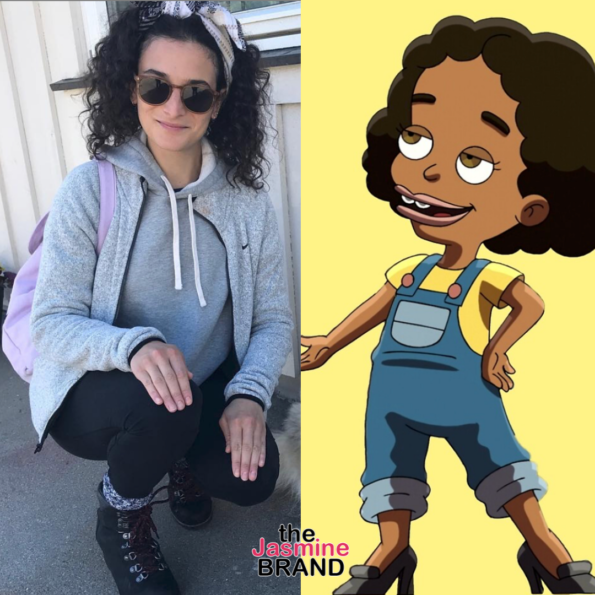 White actress Jenny Slate, who plays a bi-racial voice actor role on Netflix’s show Big Mouth, has decided to step down from her role. She said in her statement that it should be given to a black person. Jenny Slate posted a message on Instagram saying,

“I have come to the decision today that I can no longer play the character of Missy on the animated TV show Big Mouth. At the start of the show, I reasoned with myself that it was permissible for me to play Missy because her mom is Jewish and white — as am I. But Missy is also Black, and Black characters on an animated show should be played by Black people.”

She adds that she recognizes her playing the role was engaging in an act of “erasure of black people.”

“I acknowledge how my original reasoning was flawed, that it existed as an example of what privilege and unjust allowances made within a system of societal white supremacy, and that in me playing “Missy,” I was engaging in an act of erasure of Black people.  Ending my portrayal of “Missy” is one step in a life long process of uncovering the racism in my actions.”

She closes out her statement saying, that black voices need to be heard.

“As I look back on the nature and emergence of my own voice in comedy, I know that I have made mistakes along the way. I can’t change the past, but I can take accountability for my choices. I will continue to engage in meaningful anti-racist action, to be thoughtful about the messages in my work, to be curious and open to feedback, and to do my best to take responsibility for the ways that I am a part of the problem. Most importantly, though, to anyone that I’ve hurt: I am so very sorry. Black voices must be heard. Black Lives Matter.” 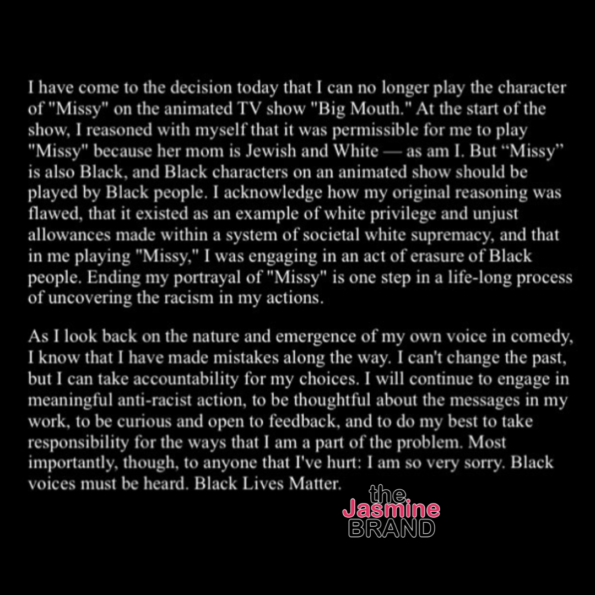 Shortly after Jenny Slate released her statement, co-creator, executive producer and star of Big Mouth, Nick Kroll, also made a statement that he would in fact be replacing Jenny Slate and hire a Black actor to portray the voice role of Missy. In a post on Instagram, he says,

“After thoughtful discussion with us an out Black collaborator, Jenny Slate has decided, and we wholeheartedly agree, that Missy on “Big Mouth” should be voices by a Black actor,  We sincerely  apologize for and regret our original decisions to cast a white actor to voice a bi-racial character.

He adds that hiring a non-black person to play the role was a “mistake.”

“We made a mistake, took our privilege for granted, and we are working hard to do better moving forward.  We are proud of the representation that Missy has offered cerebral, sensitive women of color, and we plan to continue that representation and further grow Missy’s character as we recast a new Black actor to play her.  We thank Jenny for her decision and for creating with us an inspiring, compassionate, and very human character. We look forward to being able to explore Missy’s story with even greater authenticity in the years to come.” 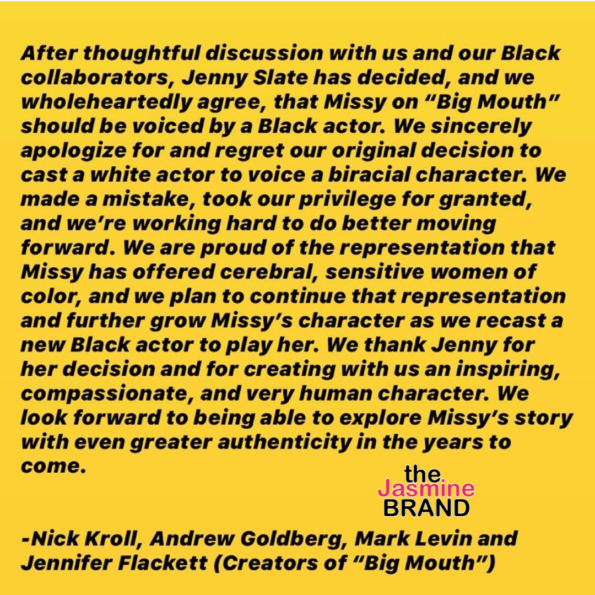 Here is a clip of Jenny Slate playing the role of Missy: 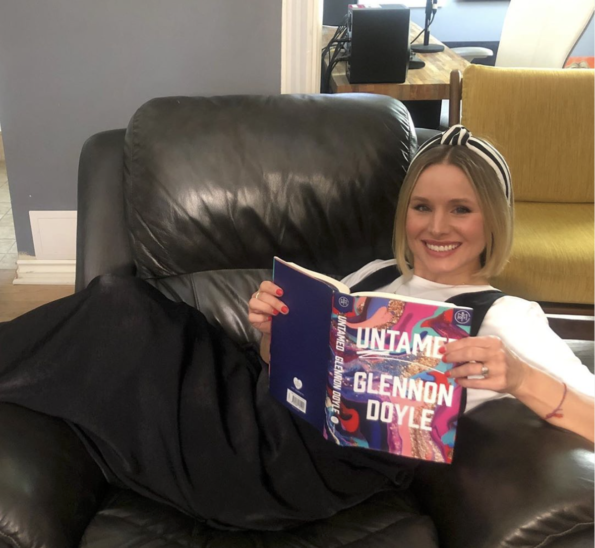 Actress Kristen Bell who also voices a black person on Apple TV+ show Central Park, also decided to step down from her role as Molly.  She said on Twitter:

“This is a time to acknowledge our acts of complicity. Heres 1 of mine. Playing the Molly in Central Park shows a lack of awareness of my pervasive privilege. Casting a mixed race character w/a white actress undermines the specificity of the mixed race & Black American experience.”

She reposted a message from the show’s creators. 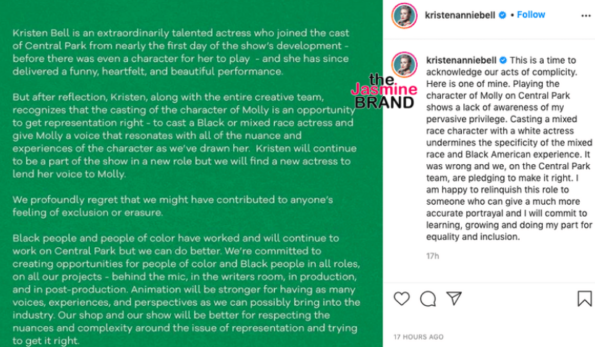 Here is a clip of Kristen Bell playing Molly in Central Park:

What are your thoughts on white actresses leaving their animated roles to give them to black actors? Let us know in the comments!

Bill Cosby Would Not Be Able To Survive Coronavirus Behind Bars, Says Spokesperson
Exclusive
Post Slider 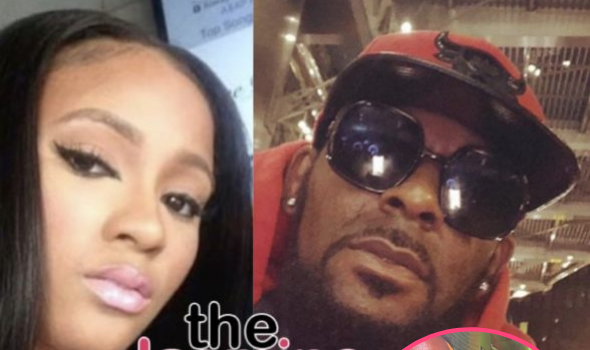 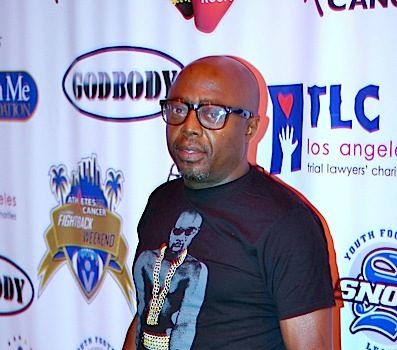 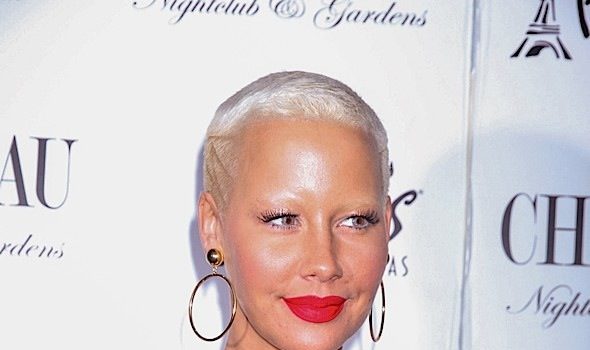