Twenty employees at The Tamron Hall Show were allegedly fired last Thursdayhttps (June 25th), including senior producers, and audience team members. Production insiders are speaking out about the sudden firings, questioning why Tamron Hall didn’t take a pay cut in order to salvage her team. One source tells the Daily Mail,

‘What really sucks is Tamron is earning millions of dollars a year, yet these team members aren’t. Why couldn’t she take a pay cut to keep everyone employed during this really difficult time? It is so unfair.‘

Sources upset about the firing pointed out that,

‘[Tamron] is living her best life on her personal Instagram while people are losing their livelihoods,’

The source continues and said Tamron Hall allegedly failed to acknowledge having to let members of her staff go amid the nationwide COVID-19 pandemic.

“Nothing about wishing people well or thanking them for their hard work. It’s pathetic and giant slap in the face.”

The day before the alleged firings, Tamron Hall posted the above photo on the beach with the caption,

“First date night since… finding the light when it seems darkness is all around. A drink in hand does help lol #facts” 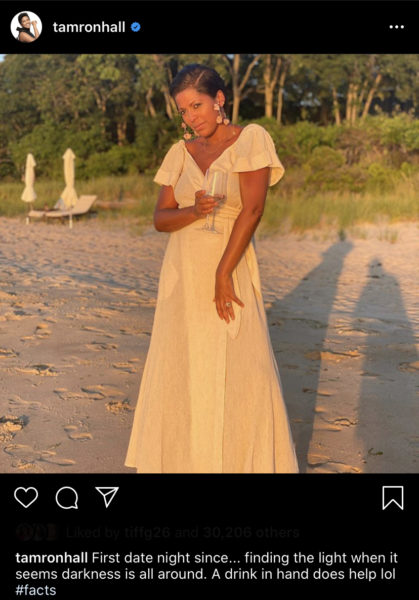 Another source adds that, since it is her show, there is no way she was unaware of the alleged firings.

“Her name is on the show so she would’ve known what was coming, yet there she is celebrating date night, the night before 20 people no longer have an income. Talk about tone deaf,’

“What’s even more disgusting is on the show’s official Instagram page, they posted a video of Tamron making comfort food with Carla Hall. How nice of them, I’m sure all the fired staff went home and whipped up the grilled cheese to feel better about no longer paying their bills.”

ICYMI: We all know how to make a grilled cheese but TRUST US when we say @carlaphall makes the best… watch to learn how!

A spokesperson for the show said in a statement that the claims against the show are inaccurate and nobody from the team was fired.

“This story is entirely inaccurate. There were no layoffs or firings; rather, the show is making behind-the-scenes changes and chose not to renew some staff. We appreciate everyone’s contributions to our first season.

“Change is not uncommon for a show between seasons. It remained a top priority to ensure our entire creative team remained employed during the season in the midst of the pandemic.

“We have been humbled and overwhelmed by the viewer response to recent shows, including coverage of COVID-19 and our episodes focused on the national conversation on race. We are assembling an even bigger team for season two and beyond, on the heels of three Emmy nominations.”

The news of the firings come just after reports that “The Tamron Hall Show” hired several members who previously worked on “The Oprah Winfrey Show.’

“The View’s” first African American showrunner Candi Carter left the show ahead of its 20th season to work on “The Tamron Hall Show.”

“Say goodbye and congratulations to one of our executive producers, Candi Carter… She brought a spirit, an energy, and all that kind of stuff. It’s been fun with her. Not too much fun, but it’s been good, and we’ll miss her. But not too much, because she’s only gonna be next door as the new EP of ‘The Tamron Hall Show.’”

What are your thoughts on Tamron Hall’s alleged firings? Let us know in the comments!
Tags: oprah winfrey, recommend, Tamron Hall, whoopi goldberg
Tweet Like Plus Pin It Share