Update #2. Halle Berry has released a statement addressing some of the reactions to this potential role. In the statement, she says:

I now understand that I should not have considered this role, and that the transgender community should undeniably have the opportunity to tell their own stories. 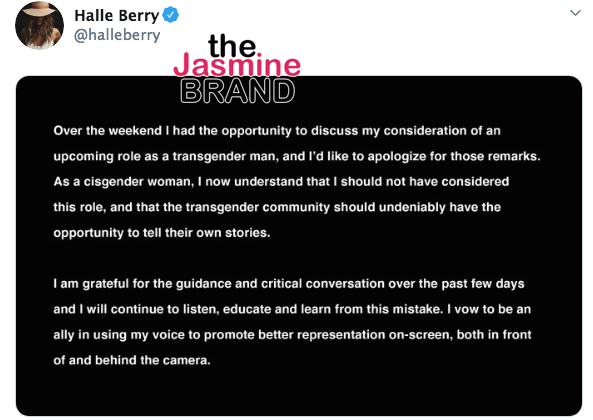 Original Story: Halle Berry is opening up about a future, potential acting role. During a recent interview, the 53-year-old actress shared that she may play a transgender character.

“I’m thinking of [playing] a character where the woman is a trans character, so she’s a woman that transitioned into a man. She’s a character in a project I love that I might be doing.. This project got pitched to me right when I was the brink of making Bruised, but I so was in the mindset of getting in the body to play that, and I don’t know how long I can play an MMA character, so I had to get that out… but this got pitched to me, and I thought, after I do this movie, that’s the character I’m going to play.

What are your thoughts about Halle Berry’s potential role? Let us know in the comments.

Actress Natalie Desselle, Who Starred On “B*A*P*S”, “How To Be A Player” Has Passed [Condolences]
Exclusive
Post Slider