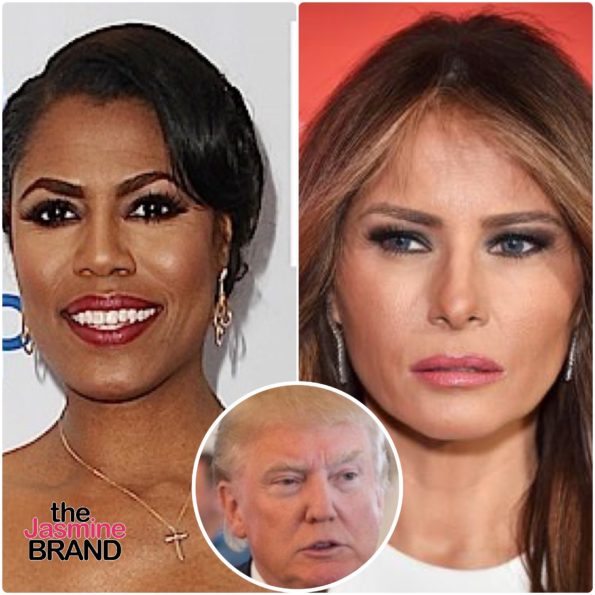 Omarosa Newman, 46, has been out of the White House for nearly three years after reportedly being fired for abusing car service privileges; however, since her departure, Omarosa has continued to spew claims against Donald Trump.  Her most recent claim, though, is geared at the president indirectly–through his wife Melania Trump.

“It’s a very strange marriage, and I’m very cautious to comment on the dynamics of people’ marriage — you never know the inner-workings — but I’ve known this couple since they were dating. And in fact, they got married a year after The Apprentice aired.”

The former director of communications for the Office of Public Liaison continued:

“What I’ve observed over the last 17 years … Sometimes they like each other and other times she’s repulsed by him. As we saw just on the debate last Thursday, he went to go and touch her hand and she smacked it away.”

Omarosa referred to one of many times the media has focused on the couple’s public affection towards each other, or lack thereof.  A topic of conversation outside of the final presidential debate itself, was Melania Trump seemingly refusing to hold her hubby’s hand.

There has been much speculation about the famous couple’s sincerity especially during their concentrated time in the public eye during Trump’s tenure as president.

In “The Art of Her Deal: The Untold Story of Melania Trump,” by Washington Post reporter Mary Jordan, she revealed details about FLOTUS, Melania Trump claiming that she allegedly renegotiated her prenuptial agreement with President Donald Trump. Reportedly, the First Lady used her delayed arrival to the White House as leverage to her renegotiation.

What are your thoughts on Omarosa’s claims? Share in the comments below.