Nicki Minaj Claims She Was Invited To The White House Over Her Remarks About The COVID-19 Vaccine + Says She May Not Return To Twitter: You Can’t Speak For The Fear Of The Mob Attacking You

Could Nicki Minaj be done with Twitter for good?

As previously reported, Nicki Minaj has been making headlines this week for her comments on social media. It began when she shared she wasn’t getting the COVID-19 vaccine until she has “done enough research.”

Shortly thereafter, she also shared a cautionary tale about the vaccine:

“My cousin in Trinidad won’t get the vaccine cuz his friend got it & became impotent. His testicles became swollen. His friend was weeks away from getting married, now the girl called off the wedding. So just pray on it & make sure you’re comfortable with ur decision, not bullied.” 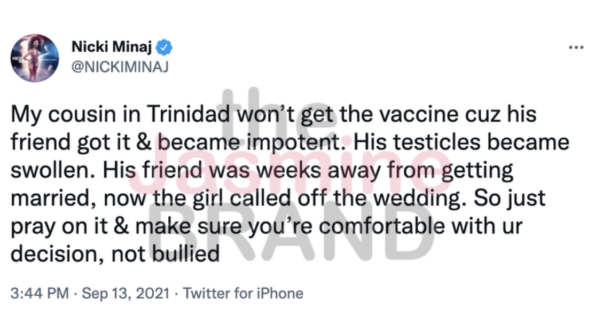 Nicki Minaj then proceeded to get into it with Joy-Ann Reid and Piers Morgan over her comments. Additionally, her claims were later shut down by Dr. Anthony Fauci and Terrence Deyalsingh, the health minister of Trinidad and Tobago.

??Minister of Health Terrence Deyalsingh says claims made by @NICKIMINAJ are Not True! pic.twitter.com/dcApHfsq1n

While she faced a lot of backlash for her comments, Nicki Minaj claims they actually earned her an invitation to the White House. Yesterday (Wednesday, Sept. 15th), the rapper tweeted:

“The White House has invited me & I think it’s a step in the right direction. Yes, I’m going. I’ll be dressed in all pink like Legally Blonde so they know I mean business. I’ll ask questions on behalf of ppl who have been made fun of for simply being human. #BallGate day 3.”

She then doubled-down and asked her fans to leave her any questions they’d want her to ask. She also claimed people would see the meeting “in real time with full transparency.”

Additionally, Don Lemon revealed that–according to his source–Nicki Minaj was not offered an actual, in-person visit to the White House. Instead, she was offered:

“A conversation with a doctor to clarify the efficacy and side effects of the vaccine.”

“They just used this man to come out and put this thing out saying that I wasn’t invited to the White House. Do y’all think I would lie? Like, what?… You know what the request was? ‘We’d like to offer Nicki an invitation to come to the White House to speak with two people… Dr. Fauci and with the Surgeon General.’ I said ‘Well, I would rather not have to travel. Can we do something like a Live?’ And they said that they’re open to me choosing a platform to do a Live. But they have never taken that off the table for me to come to the White House.”

Nicki Minaj also shared her thoughts on what Twitter has become, and said she was considering not going back on the app:

“[I won’t] go back on Twitter because now it’s starting to feel a little scary… We have become that place [where] you can’t speak. You can’t speak for the fear of the mob attacking you. If that doesn’t give you chills up and down your f**king spine. This is scary! You should be able to ask questions about anything you’re putting inside our body. We ask a lot of questions about the most simple things… But you can’t just innocently ask a question about something going in your body?… People will isolate you if you simply speak and ask a question. Y’all don’t see what the f**k is happening?”

“I’m in Twitter jail y’all. They didn’t like what I was saying over there on that block, I guess. My poll was gonna be: Asking questions is OK [or] I like being fckn dumb. Them boom. Can’t tweet [laughing Emojis]”

Nicki Minaj continued, comparing her stance on the matter to one Malcolm X would take:

“Y’all gotta stop pretending to love ppl with backbones. If Malcom X were here, he’d be asking questions & most of y’all that holler ‘Black Lives Matter’ & ‘protect Black women’ would be telling him to shut-UP & fall in line. Y’all say these ppl’s names but embody the spirit of a coward.” 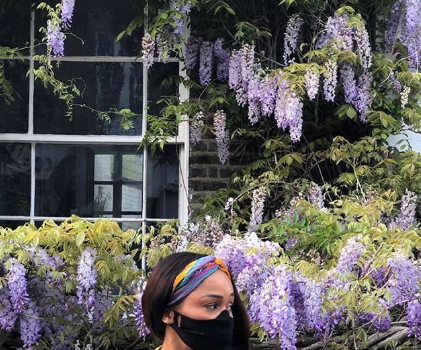 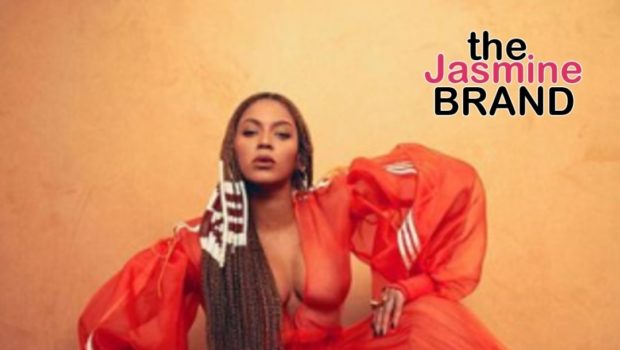