Kim Kardashian West and Kanye West have reportedly gotten involved with A$AP Rocky’s jail time in Sweden. A$AP Rocky has been in jail in the country for more than two weeks, possibly facing aggravated assault charges.

According to reports, KimYe are two of many celebrities fighting for A$AP’s case as a petition has been launched to get him released from what has been described as harsh conditions. 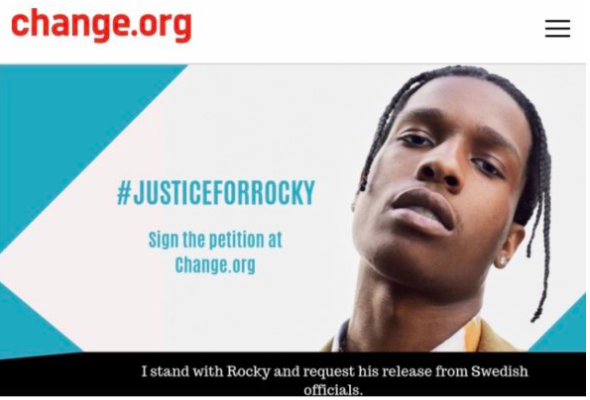 The power couple are said to have taken things a step further and contacted the White House on A$AP’s behalf. President Donald Trump now not only knows about A$AP’s issue in prison, but has his team of people taking steps to get A$AP released.

Kardashian reportedly called Kushner and told him what was going on with the rapper, and Kushner then told Trump about it. Kareem Lanier and Pastor Darrell Scott who are a part of the White House’s Urban Revitalization Coalition also stepped in and linked A$AP’s management team with Kushner.

Trump agreed that something didn’t seem right about A$AP’s jailtime.  Secretary of State Mike Pompeo stepped in and a State Dept. employee is scheduled to land in Sweden Thursday and continue efforts to get A$AP out.

Still, some parties such as members of the Congressional Black Caucus aren’t satisfied and said Pompeo should have acted more quickly. Meanwhile, officials and Sweden are reportedly unbothered by all of the activity on the U.S.’s end. Prosecutors could even push back their decision to charge, or not charge A$AP past the three-week mark. A$AP could stay behind bars the entire time.

The Jasmine Brand previously reported A$AP was arrested with accusations that he physically attacked man in the street. The incident came after a woman accused the man of sexually assaulting her. A$AP’s incident was caught on tape and while some said A$AP wasn’t to blame, authorities in Sweden weren’t moved and arrested him. He’s been in jail ever since.

What do you think about KimYe getting involved? Let us know in the comments.