Things are getting super duper ugly between Quality Control CEO Pierre “Pee” Thomas and his ex-fiancée Lira Galore, who he welcomed a baby girl with in April.

Pierre Thomas seemed to reach his breaking point amid their custody drama. It’s been reported that in court documents, Lira Galore accused Pierre Thomas of physically abusing her multiple times. Thomas denied any allegations and said Galore was the one who was abusive, and added that she uses drugs.

theJasmineBRAND exclusively reported Tuesday (Dec. 17) that Lira also accused Thomas of being a bad father and using his children, including their daughter, for photo ops on social media. Read about that here. 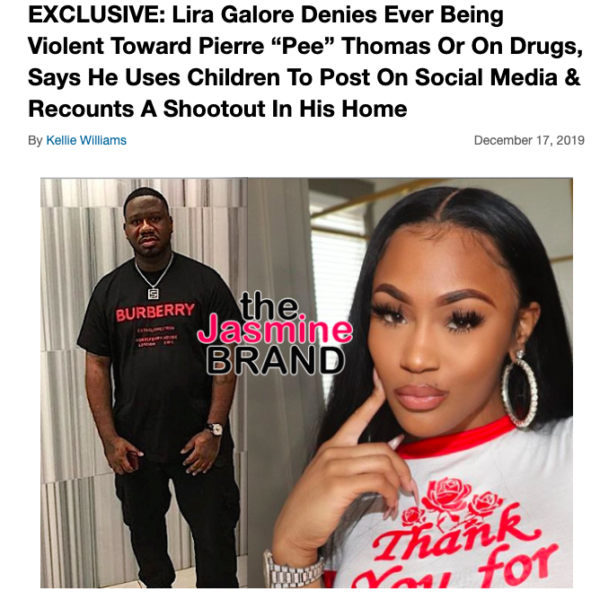 Now, Thomas has responded to the accusations about his father skills. He wrote on Instagram Tuesday (Dec. 17),

“One thing I don’t play about is my father hood. I have 16 artist on my label, I still make time to see my children 4 times out of the week. The only women I leave my children with are there mothers and the women I was engaged with. I wasn’t gonna address this but I’m just tired of seeing my child’s mother try and slander me as though I’m so unfit. No I’m not perfect but if anyone knows me they know I go hard every day so my children will never have to go what I’ve been through. She can deny her bad drug habits and her toxic aggressive behavior all she wants but the truth of the matter is what I’ve tried to do nothing but help her.”

He added that Galore’s accusations are nothing more than an attempt to try and extort him for $15 million.

“THIS IS OBVIOUSLY A 15 MILLION DOLLAR SHAKE DOWN FROM AN ANGRY WOMEN WHO IS DOWN TO HER LAST AND CLEARLY UPSET BECAUSE A FAILED ATTEMPT TO GET HER CHILD SUPPORT SWITCHED TO LA THEREFORE SHE’D ACCUMULATE MORE EACH MONTH VERSES GEORGIA.”

He went on to deny physically abusing her, and accused Galore of cheating on him. He also claimed she was allegedly using cocaine while pregnant with their daughter.

IVE NEVER ONCE BEAT ON THAT WOMEN… DID I TAKE MY RING BACK, YES! WHEN I BECAME AWARE SHE WAS HAVING SEX WITH OTHER MEN, PLOTTING WITH HER PIMP, AS WELL AS SNORTING COKE WHILE PREGNANT WITH MY CHILD. WHAT MAN WOULD NOT WANT THERE RING BACK? I HAVE NOT SEEN MY CHILD SINCE FATHERS DAY WHY? Because the root of all evil… MONEY!”

He continued and said he had receipts to prove all of his accusations.

“I HAVE TEXT MESSAGES AS WELL AS PROOF THAT WE WERE ON PRETTY FARE TERMS UNTIL SHE REALIZED SHE WAS NOT GONNA BENEFIT AS SHE ONCE WAS WHEN WE WERE TOGETHER. People that know me and her know the truth! This is my last time speaking out this situation, hopefully we can keep this matter out of the public eye for the sake of our daughter having to look back and see. A wise man once told me when you lay down with pigs you get mud all over you… guess he was right. PS: Everyone know who my children mothers are. Ask them” 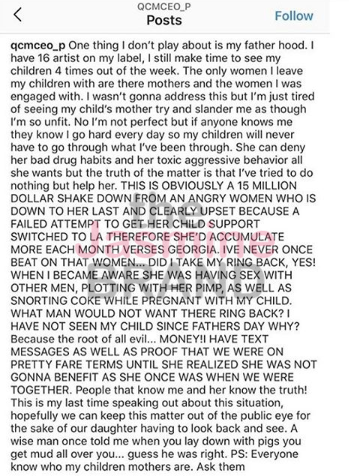 Interestingly enough, he posted the alleged receipts when he shared screenshots of what appeared to be text messages between him and Galore.

In one of the conversations, Galore seems to allegedly admit to using coke. 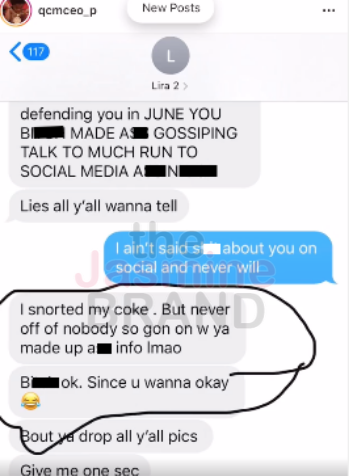 In another conversation, she accuses him of not defending her, and having his artist Yung Miami, who’s real name is Caresha Romeka Brownlee, go on a trip to Cabo in Mexico so he can cheat. 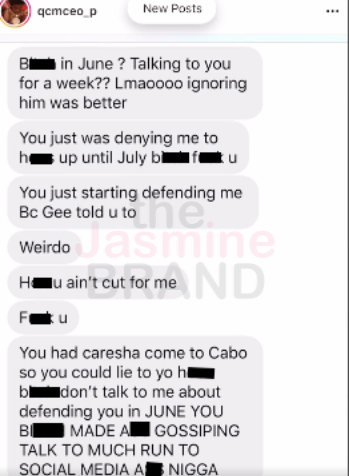 In another text, he told Galore she was a good mom, and she told him she was still in love with him. 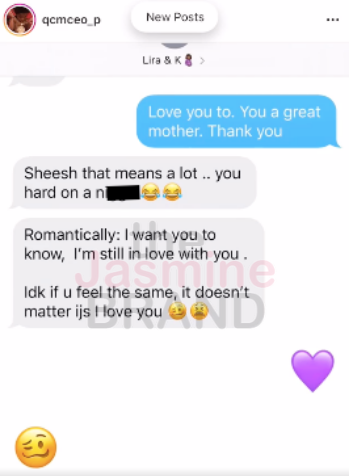 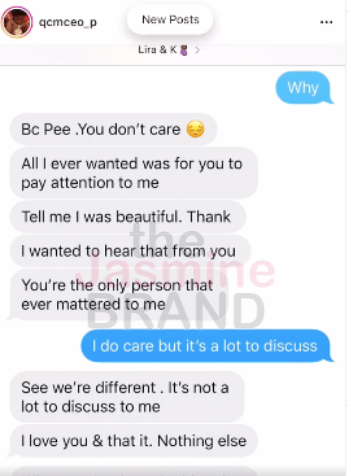 But things went left in a different group of texts. 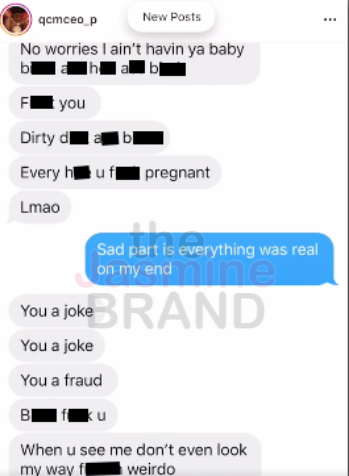 He then accused Galore of not allowing him to see their child, and said he wanted to have a custody agreement. 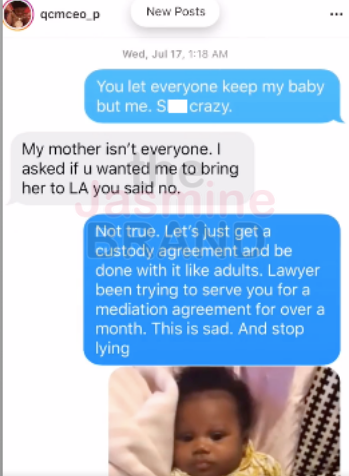 She also told him she refused to wait for him, and he seemed to be okay with that. 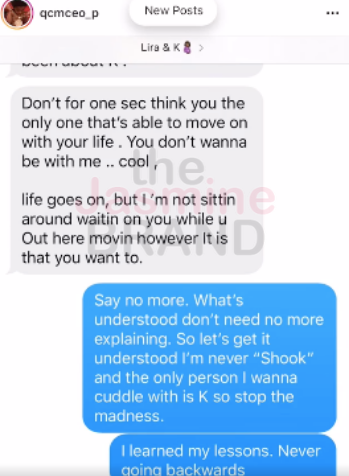 In another text, he revealed she allegedly had multiple abortions, as she said she didn’t want to have his child. 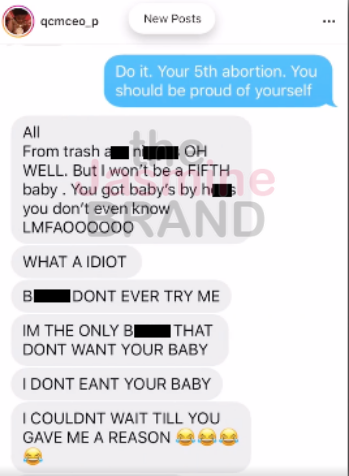 He has since deleted all of his Instagram posts, including the cryptic ones about Galore. 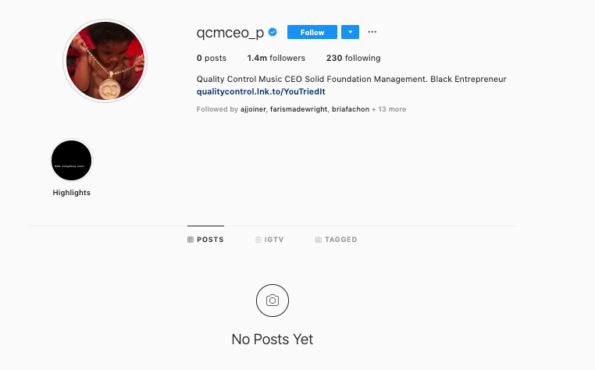 Galore seemed to respond with a meme. 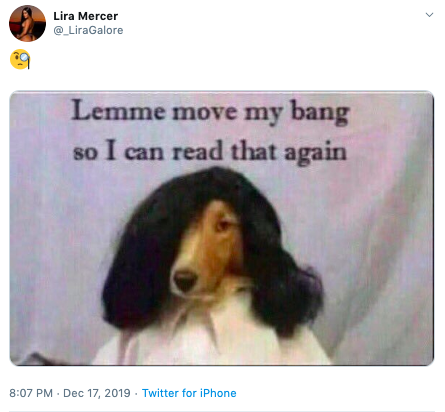 What do you think about the alleged texts between the exes? Tell us in the comments. 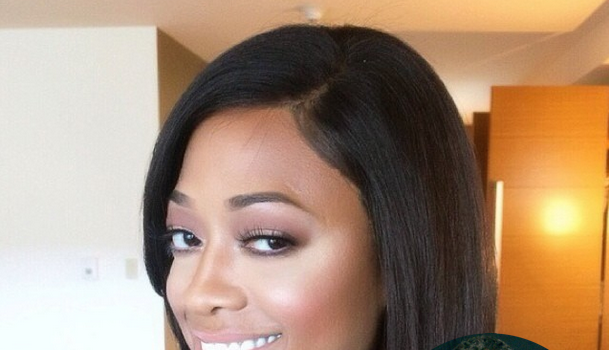 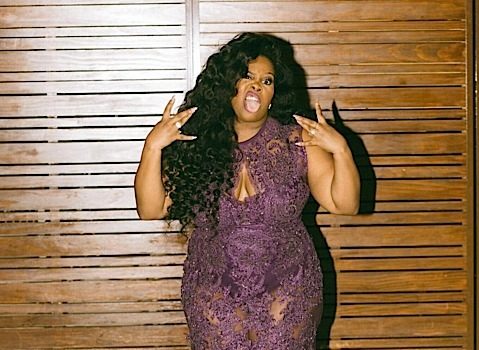