Very sad news to report as the United States Supreme Court confirmed the passing of 87-year-old Supreme Court Justice Ruth Bader Ginsburg. She reportedly died Friday (September 18) as a result of complications from metastatic pancreas cancer. She was only the second woman to serve as a judge in the Supreme Court and because of her fearless stance on various controversial issues including voting rights, immigration, and abortion rights, she became known as “The Notorious RBG.”

In 1993, Ruth Bader Ginsburg was appointed to the Supreme Court by the nation’s then-Democratic President Bill Clinton. Just days before her passing, she reportedly informed her granddaughter Clara Spera that she did not want her replacement to be chosen by the current commander-in-chief President Donald Trump but by a new president:

My most fervent wish is that I will not be replaced until a new president is installed.

However, it would appear that her desire may not be honored. In a statement released by Senate Majority Leader Mitch McConnell, it seems that the President’s nominee for Justice Ruth Bader Ginsburg‘s now-vacant seat could be appointed soon:

President Trump’s nominee will receive a vote on the floor of the United States Senate. 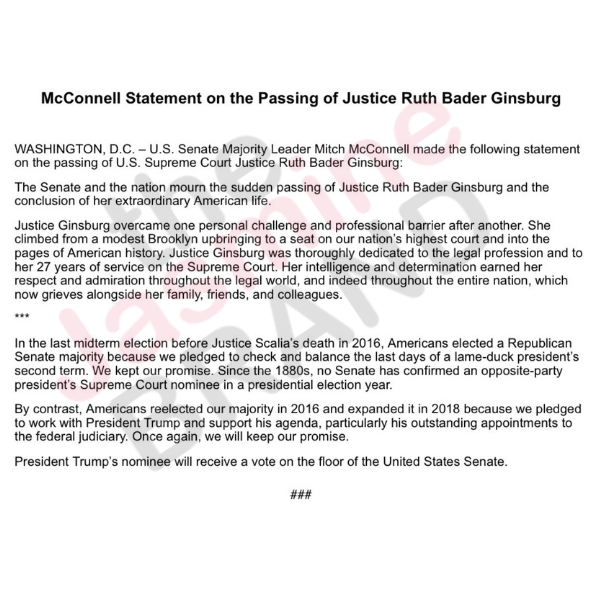 Justice Ginsburg actually made her dislike for President Donald Trump known back in 2016 when he was on the campaign trail. During that time, she constantly blasted him and his views. She even dubbed him a “faker” at one point because he did not release his tax returns. As a result, she became the subject of one of the Presidents infamous tweets. He said:

Justice Ginsburg of the U.S. Supreme Court has embarrassed all by making very dumb political statements about me. Her mind is shot – resign!

Regardless of this, many will remember Justice Ginsburg as an unapologetic force before she was appointed to the highest court in the land. She was part of many major court cases that shape Americans’ lives to this day. For example, in 1996, she indicated that women should be allowed to attend Virginia Military Institute, which was the last all-male public university in the nation at the time:

As long as there are qualified women who want to go — and there are — they must be admitted.

She was an advocate for the American Civil Liberties Union (ACLU) and assisted with making sure that the equal protection named in the Constitution’s 14th Amendment included gender. Justice Ginsburg also fought through gender discrimination as one of nine women in her class at Harvard Law School and following her 1959 graduation from Columbia Law School, she was unable to find a clerkship even though she tied for the number one student in her class. Justice Ginsburg later wrote that she also dealt with religious discrimination:

The traditional law firms were just beginning to turn around on hiring Jews. But to be a woman, a Jew, and a mother to boot — that combination was a bit too much.

Despite all the different forms of discrimination she faced over the years and the fact that she had also fought through five instances of cancer, Justice Ginsburg leaves behind a legacy of tenacity, zeal, and determination. She reportedly became one of the most respected Supreme Court justices in the history of the high court. In 2011, Justice Ginsburg expressed how she would like to be remembered:

I would just like people to think of me as a judge who did the best she could with whatever limited talent I had to keep our country true to what makes it a great nation and to make things a little better than they might have been if I hadn’t been there.