Chicago Rapper King Von‘s family has released a statement for the first time since his death.

They shared a message on his Instagram page Wednesday (Nov. 18th). The caption reads:

The message thanks fans for their support, and reveals upcoming projects that the late rapper was working on ahead of his passing.

“Thank you to everyone who has showed their outpouring of love for King Von. You all played a massive role in Von’s accomplishments, and by continuing to play his music and sharing your stories about how he has inspired and influenced you all, you’re keeping his legacy alive. 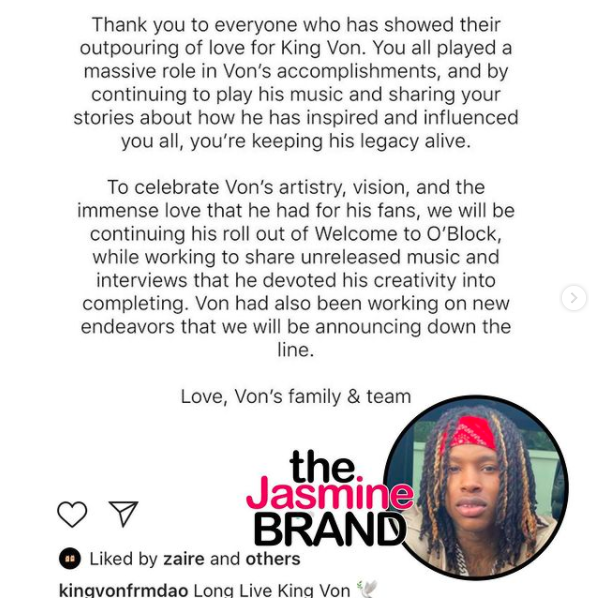 To celebrate Von‘s artistry, vision, and the immense love that he had for his fans, we will be continuing his roll out of Welcome to O’Block, while working to share unreleased music and interviews that he devoted his creativity into completing. Von had also been working on new endeavors that we will be announcing down the line.

The Chicago rapper King Von, real name Dayvon Daquan Bennett, died on November 6th in Atlanta after a shooting at an Atlanta nightclub. The gunshots left two people dead and many others injured, including someone who was hit by a car as bystanders attempted to quickly leave the area, according to Atlanta Journal-Constitution.

His record label also issued a statement shortly after his death.

Condolences and prayers for King Von’s family, friends, and fans.