According to reports, businesswoman/politician Kelly Loeffler is one step closer to selling her ownership stake in the WNBA’s Atlanta Dream. A representative for the WNBA confirmed with ESPN that it’s only a matter of time before Kelly Loeffler is no longer a team owner. The spokesperson said,

“a sale of the franchise is close to being finalized.”

It’s currently unclear who the potential buyer(s) for Loeffler’s ownership stake will be but the representative added,

“once the sale negotiation is concluded, additional information will be provided.”

Kelly Loeffler has had ties to the WNBA’s Atlanta Dream for the past decade. However, as we previously reported, due to controversial statements she’s made regarding players supporting the BLM movement, many people have been pushing for her to sever any ties she has with the organization. In a letter she wrote to Cathy Engelbert, the commissioner of the WNBA, Kelly Loeffler said,

Following Kelly Loeffler’s recent loss in the Georgia Senate race, LeBron James came forward and shared that he’d like to create a group to buy the Atlanta Dream. He shared a picture of Atlanta Dream players wearing shirts in support of Kelly Loeffler’s then-opponent, Senator-Elect Rev. Raphael Warnock, to his Twitter account. He captioned the image,

“Think I’m gone put together an ownership group for the The Dream. Whose in? #BlackVotesMatter” 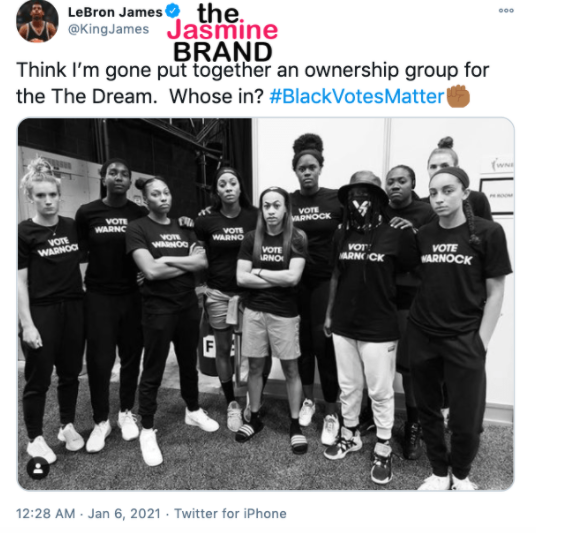 What are your thoughts on Kelly Loeffler selling her stake in the Atlanta Dream team? Let us know in the comments.