Former Real Housewife of Atlanta star and radio personality, Claudia Jordan, had some choice words to say about the Texas abortion law that went into effect this week.

In Texas, abortions are now prohibited once medical professionals detect cardiac activity, which is usually around 6 weeks and before many women know they’re pregnant. The law was signed off by Republican Gov. Greg Abbott in May and took effect Wednesday, Sept. 1st.

Many people have expressed their outrage  for the law and Claudia Jordan, took to Twitter to bash the new regulation. She tweeted,

“Well Texas ladies—especially those who unfortunately are being screwed by Texas republicans—time to go on a #C**chieStrike until they take this dumb law off the books! #NoChoiceNoAss”

Claudia Jordan also reposted a tweet that shows a website where people can submit women’s names who are seeking abortions called Profilewhistleblower.com. According to one Twitter user, you can crash the site by entering false information.

She seemingly responds sarcastically to the information and suggests Kpop fans (the Korean pop music fandom most notably known for disrupting Trump rallies last year) help get the site closed down as well.

“Great idea! A whole website to snitch on women and put bounties on anyone that assists them. I need the #Kpop nation to get on this!” 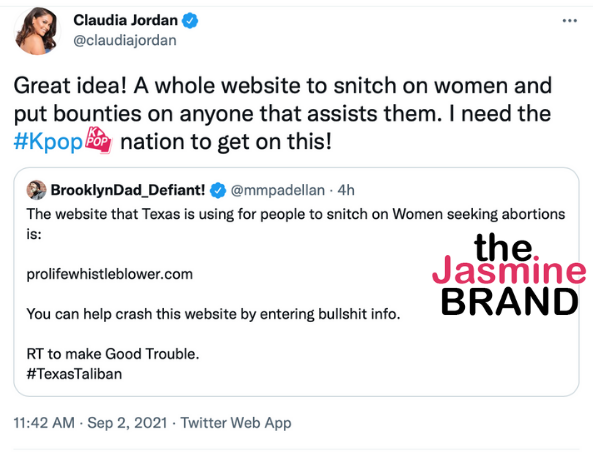 The 48-year-old proceeded to tweet about how men should be concerned more about themselves than what women do with their own bodies.

“Control ya own d*cks instead of trying to regulate woman’s uterus. Period.”

Not only are abortions being prohibited after detecting cardiac activity, but Texas citizens are also allowed to bring civil lawsuits in state court against anyone involved in an abortion, other than the patient. According to reports, Justice Sonia Sotomayor called the Texas law “stunning.” She also said,

“Presented with an application to enjoin a flagrantly unconstitutional law engineered to prohibit women from exercising their constitutional rights and evade judicial scrutiny, a majority of Justices have opted to bury their heads in the sand.”

In an effort to help expand the Supreme Court and save abortion rights, Claudia Jordan shared a petition on her Twitter that could help allow Texans to have access to safe and legal abortions.

This cause is close to my heart – please sign: https://t.co/B3oJksiZMg

What do you think about the Texas abortion law and Claudia Jordan’s Tweets? Let us know in the comments 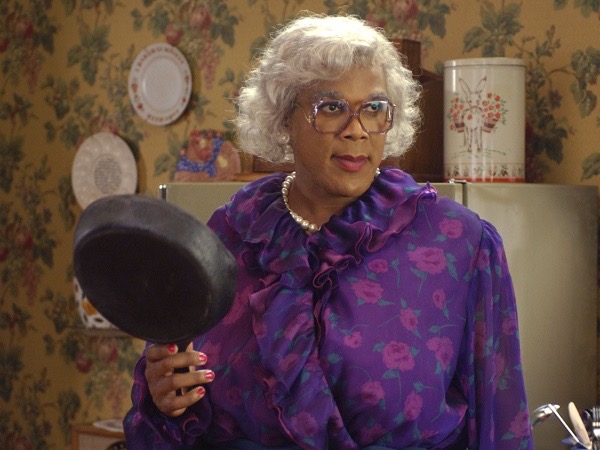