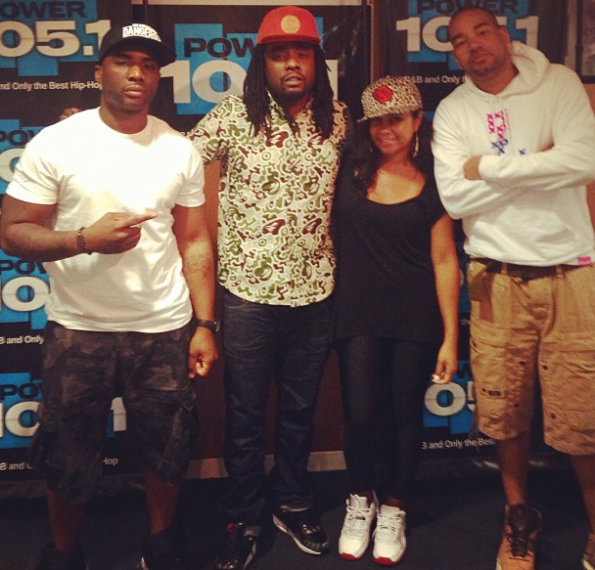 This week, Wale stopped by Power 105’s The Breakfast Club, to promote his upcoming album, ‘The Gifted’. Peep a few excerpts from the interview:

Why he didn’t adjust his album release date, to drop on the same day as J.Cole and Kanye West:

That’s not inspiration. I think he’s one of the greatest, I’m not gonna adjust what I’m tryna do. I wasn’t gonna be like ‘Can I come to your sandbox and play?’ I think it’s good for the sport, if you ain’t know, it’s competitive. We in that zone, it’s just like Kobe and Durant playing each other.

Being in a happier, mental place:

I’m coming to the realization that people are just plain ‘ol evil. There hasta be people like that.

Earlier this month, there were rumors that a private DM message between Wale and someone on twitter had leaked. Allegedly, in the conversation, Wale alluded to the fact that he had been intimate with Rihanna. On how the rumor affected him:

I was like ‘It got real…’ Just know it turned into a real thing. And I was like, ‘This is gonna mess up my potential working relationships’. You gotta be a sick individual to do that. What if I was in a committed relationship? I’m honest w/ my joints though. The thing about Rihanna is her realness. I can’t be really cool with a lot of girls. When you have a friend like that, that got more than you, you just gotta appreciate the friendship. You gon’ smoke alot, you gon’ chill, you gon’ dance, it’s gonna be a movie around you. You cant try and smash everything. You gotta have soem platonic friends.

How he feels about the direction that Kanye West is going to lyrically:

It’s the evolution of what he was gon be and what the world made him.