Is this Brian McKnight‘s children’s one last cry for their father’s love? Two of the singer’s four children have taken to Instagram, exposing their broken relationship with their famous dad.

Despite having been previously seen singing onstage with her dad, Brian McKnight, Jr. went into detail about feeling abandoned by Brian, Sr. He noted that his father doesn’t spend time with his grandchildren, either. His post reads:

“@brianmcknightjr I can’t imagine abandoning my children man. Its hard not to imagine the psyche of a man who can truly just turn his back on his actual sons, on his actual blood,and creations. It’s mind boggling to me. I don’t think there is any situation that merits the way my father has chosen to treat my brother, my sisters, and his grandchildren, one of which being his first born’s, first born son, who also bares our name. It’s insane to me. To have absolutely no empathy for the type of life be introduced us to, only to become to resent us for that life catching up with us. It breaks my heart, but not for myself, specifically for my siblings, and my children. They don’t deserve this at all, not open bit. And I’m not letting sh*t slide, not for one second.” 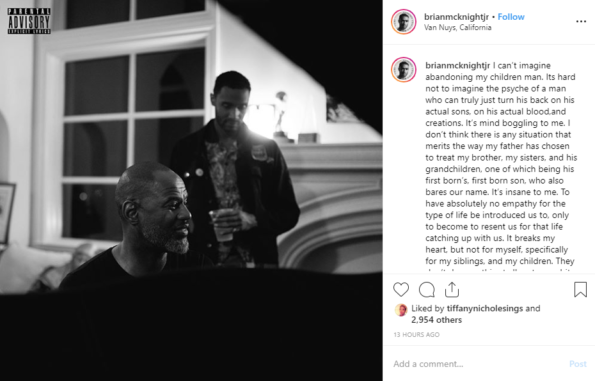 “I’ve tried my best to take the high road, and be the bigger man, and all that positive sh*t, but there is a much bigger issue here, when it comes to black fathers, especially in entertainment that needs to be addressed. I believe there is a serious discussion that needs to be had, and A part of me truly feels like our story is the one to begin the conversation that will lead to healing a lot of young men, and woman with abandonment issues. It’s time to tell our side of the story. #SONOFALEGEND”

This isn’t Brian McKnight, Jr.’s first time putting the McKnight family drama on blast. Just last month, he posted a message of empathy for the “Back At One” singer.

“@brianmcknightjr Time really flies man. I’d give anything to go back to this family trip, it was pretty much the only one where we were all together. So much has happened since then. Life has thrown more curve balls then I could’ve possibly imagined as the 11 year old you see pictured. As I get closer to the age my dad was here, I’ve grown through my own experience with becoming a father too early, and it’s given me a new found empathy for what he must have been going through. Not that he didn’t have his own demons, but the added pressure of being a dad, and a husband, while balancing super stardom couldn’t have been easy. I just want you to know I understand man, and though we don’t speak much these days, I still love you with all my heart, and I just want you to be happy. I still pray one day, we can all be one again, and just enjoy some time. Til then. [peace sign emoji] #tbt” 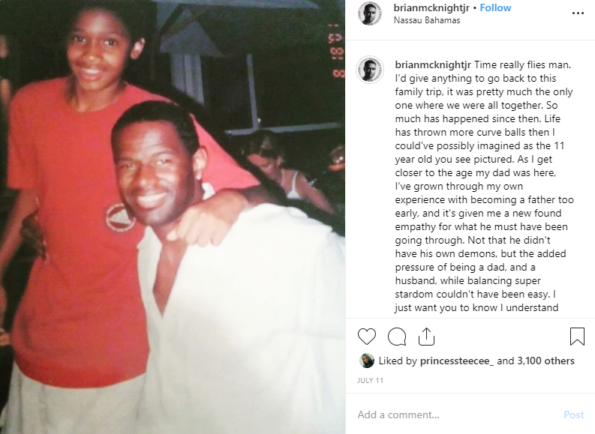 Brian McKnight’s daughter, Briana, echoed her brother’s sentiments with a heartbreaking post about longing for her father’s love, and a strained relationship with her stepmother.

“@brimcknight “Daddy’s little girl” was never really a thing for me. Nobody understands what I’ve been through except for my siblings. Believe it or not, I’m not always the person I seem to be. I’m not always happy and most of the time I’m battling my own demons just like everyone else. I grew up thinking that the things that happened to me and my dad’s relationship was my fault. I grew up thinking that he doesn’t want to come to visit me because he doesn’t love me. Constantly put behind other kids that he would call his own while I’m cast into a land far far away in the back of his mind. It sucks knowing that someone else, who’s not even blood related to you comes before you in every single way. It sucks knowing that my phone calls have to go through a stranger I barely know, that my text messages are read without a response, and that my stepmother tells me that they “wish the best for me”. It kills me to know that it’s so hard for me and my siblings to get a word in. Not one word.” 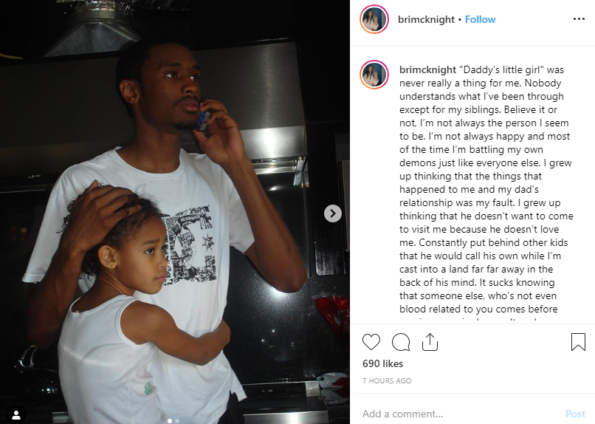 “At a very young age, I was always second place in my father’s heart. Maybe even third, fourth, or fifth, depending on the situation. My father hasn’t called to wish me a “happy birthday” in years and yet I sit by the phone every single year hoping that one day his heart will change. I’m so fortunate that I have two brothers who are father figures to me. Who celebrate me and love me every single day and that we make up the time that we lost. The anger and the sadness that I hold in my heart every day over this is sickening. It hurts knowing that my brothers went through this at my age (and are still going through it) and that my little sister is going through this at her young age. I don’t usually write things like this but I feel like enough is enough and like BJ, I want to share my side of the story. I hope that there’s someone out there that has gone or is going through the same thing. Some teenage girl who deals with this shit constantly who can relate to me and tell her side of the story and know that she’s not alone.”

Yikes! Brian McKnight has yet to respond to Brian, Jr.’s and Briana’s claims of abandoning them.

Will they be able to resolve their differences?

Big Sean Is Building A Movie Theater In Detroit 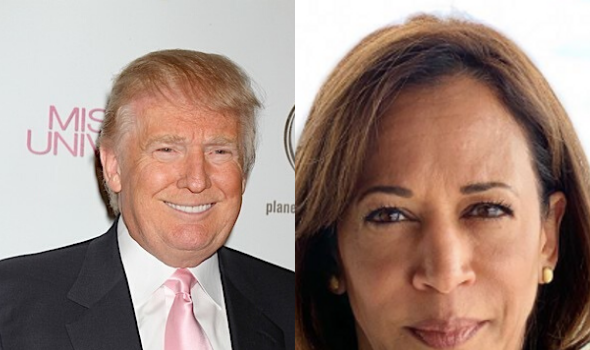