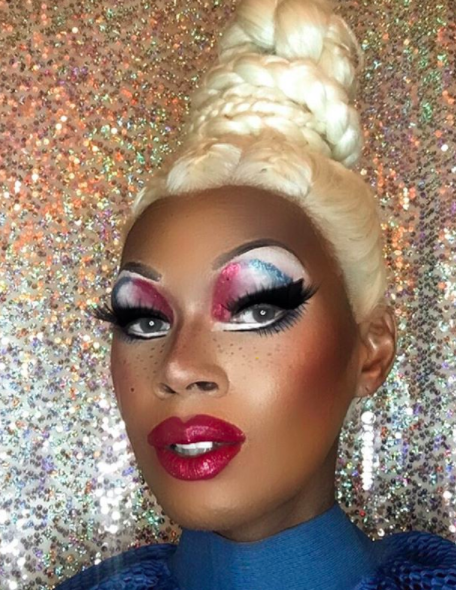 Chi Chi DeVayne, 34, one of the popular and well-loved contestants from the long-running reality competition show “RuPaul’s Drag Race” has died after being hospitalized with pneumonia. She was featured in the third season of “RuPaul’s Drag Race: All-Stars” and initially made her mark as a contestant on the eighth season of “Drag Race.” (Contestants of the shows typically use pronouns interchangeably.)

Her Southern charm, creative fashions, and classically-trained dancing ability won over the judges and fans alike.

Offstage, the talented performer was known as Zavion Davenport. His family posted a photo of their beloved on his Instagram page to sadly confirm the reports. The text on the photo begins with a Bible verse and also says:

We are confident, I say, and willing rather to be absent from the body, and to be present with the Lord. II Corinthians 5:8

On behalf of the Davenport/Wyandon Family

It is with tremendous sorrow that my family and I announce the passing of my beloved son, Zavion Michael Davenport, the world renowned “Chi Chi DeVayne.” Out of respect for the immediate family, please await additional information and directives regarding the final arrangements, memorials, and the method to remit condolences and expressions of kindness. His final words to his family and fans, “Never Give Up!” 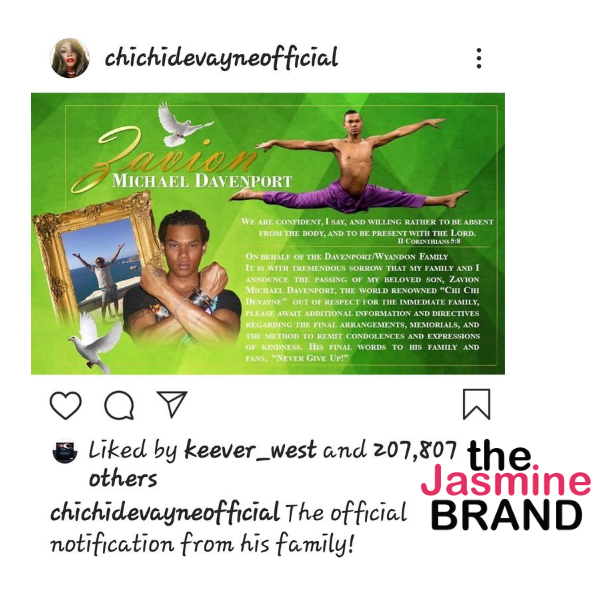 The Shreveport, Louisiana native was reportedly diagnosed with scleroderma, a chronic illness that affects the skin and causes thick tissue to develop around internal organs which causes them not to function properly. In an interview, she described the illness as “incurable” and said:

It’s hard when you go from being at the top of your game and then … something like this hits.

RuPaul Charles, the creator of both shows, released a statement on the passing of Chi Chi DeVayne:

I am heartbroken to learn of the passing of Chi Chi DeVayne. I am so grateful that we got to experience her kind and beautiful soul. She will be dearly missed, but never forgotten. May her generous and loving spirit shine down on us all. On behalf of VH1, World of Wonder and the cast and crew of RuPaul’s Drag Race, I extend my deepest sympathy – from our family to hers. 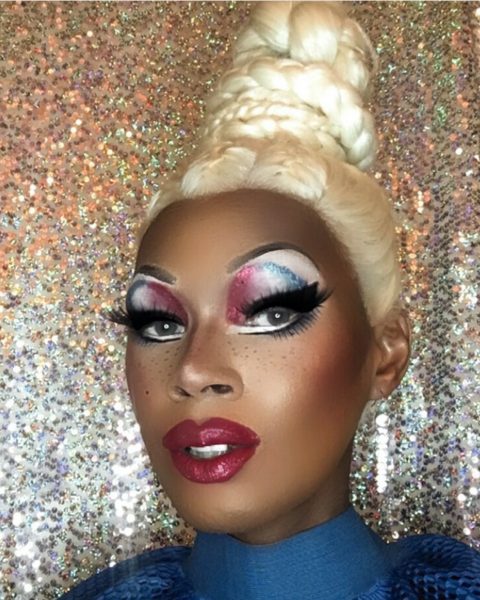 Many of Chi Chi DeVayne‘s fellow drag queens and alumni from “Drag Race” and “All-Stars” as well as fans have taken to social media to share their sadness and memories:

You may not be with us physically, but the moments you shined, the smiles you brought, the talent you displayed will be with us forever. ??? Rest easy, Queen. We love you, Chi Chi. pic.twitter.com/Er8tP2Lytd

So much light, kindness, and creative talent. Gone much too soon. Love you, Chi Chi. Rest in Power. pic.twitter.com/ijeOsTrT3g

Chi Chi Devayne was one of my @RuPaulsDragRace faves and seeing her live proved why. A Whitney classic. A wig toss. And the pure joy she brought to every moment. One of my all-time favorite Drag Race shows was this one at South Beach nightclub. A true queen. pic.twitter.com/aVMND0sIZK

R. I. P #ChiChidevayne may you fly high and death drop your way into heaven! ????? Beautiful soul! pic.twitter.com/V1YFsSGvXS

Chi Chi DeVayne’s light will shine forever in all of our hearts. She was truly a legendary queen. Rest in perfection. ? pic.twitter.com/dlbRex2mNN

I’m heartbroken to hear about the loss of our beloved Chi Chi De Vayne. She had a natural, God-given light within her & she shared it with all of us on Drag Race. She was a star & without her the world has less sparkle. I’m sending love to her family, her friends and her fans. ??

Prayers to the family of Zavion Michael Davenport a.k.a. Chi Chi DeVayne.

Robyn Dixon Seemingly Calls Out ‘RHOP’ Producers After She Appeared To Speak On Rumors About Wendy Osefo: Someone Felt It Was Necessary To Throw Me Under The Bus
Exclusive
Post Slider