It’s safe to say Patti LaBelle thinks Ariana Grande is an amazing singer — even better than her!

“She’s surpassed her peers. And she does everything herself, which is not always the way with the young baby girls. She doesn’t need any machines. She’s a baby who’s able to sing like an older black woman.”

She added that her four-year-old granddaughter, Gia, looks up to Grande and often rocks her infamous high ponytail. LaBelle pointed out a time when the two ladies were scheduled to perform for then-President Barack Obama’s Women of Soul concert at the White House in 2014. Grande was nervous to hit the stage, but LaBelle said she told her,

‘Girl, you’re a beast. Go up there and sing like that white-black woman you are.’ Ariana can sing me under the table—and listen, I can sing.”

Grande and LaBelle go way back to 2012 when LaBelle sang Over The Rainbow at Grande’s 18th birthday party.

They’ve developed a bond since then. LaBelle supported Grande at one of her concerts for her Sweetener World Tour earlier this year. 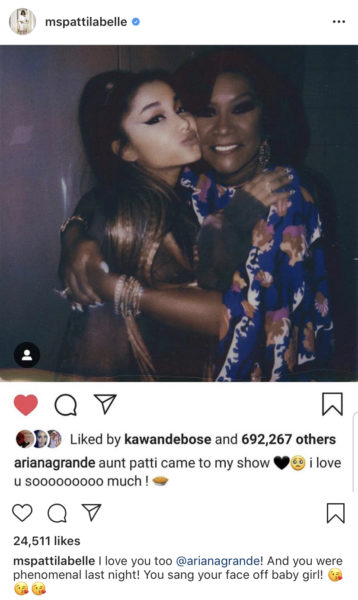 She also presented Grande with the Woman of the Year for Billboard’s Women In Music awards last year. Grande’s Thank U, Next had just hit number 1 on Billboard’s Hot 100.

“I’m here for my baby girl. I love her so much…She’s soulful, strong, sensational, she’s all that and a bag of chips. Although I have shoes older than her, and they may be taller than her, she’s a giant talent who sings from the heart as I learned when we sang together at the White House for President Obama and Mrs. Obama. She tore it down. She’s always standing tall for herself, her fans and for all the young women out there who see themselves in her.”

What are your thoughts on what Patti said about Ariana?