UPDATE: Footage of Saucy Santana right after the shooting has been released. While still on the scene, the rapper can be seen and heard saying,

“I was sitting in the front with my friends…”

“These people trying to kill me!”

Additional footage shows his bloody arm as he initially refused to go to the hospital to get treatment. He said,

Footage of #SaucySantana after being shot. Thankfully he is okay ?? Full story on #theJasmineBRAND.com

Saucy Santana has spoken out and said he’s convinced he was a target because of his sexuality. He told TMZ Wednesday (Dec. 11), that he believes the gunman was at the same strip club he and his friends were at just before the shooting and was upset because

“all the girls [were] flocking to me.”

“Homophobia is still very, very real, but it needs to end because we’re people.”

Prayers are going up after three people, including one of City Girls rapper Yung Miami’s friends, are in the hospital after a highway shooting in Miami Wednesday (Dec. 11).

Florida Highway Patrol authorities reportedly said that shots were allegedly fired on the entrance ramp of  I-95, coming from Miami Gardens Drive. The incident went down at roughly 4:00 in the morning, according to NBC Miami.


Reports say that a Chevy sedan pulled up to a Honda sedan that had three people inside, and began shooting, allegedly firing roughly seven shots. All three Honda passengers were shot and rushed to Aventura Hospital to be treated for injuries to their hands and arms. Fortunately, none of the injuries are serious.

One of the injured is Saucy Santana, who’s friends with Yung Miami, and also has millions of YouTube views on singles like “Walk Em like A Dog.”

“Approximately around 4AM Wednesday Morning Saucy Santana and friends were traveling along Miami Gardens Dr on the Ramp to I-95 Northbound which seem to be a random drive by shooting that took place. Everyone involved was transported to the hospital and is stable condition. Saucy Santana wants to thank everyone for the calls and support.” 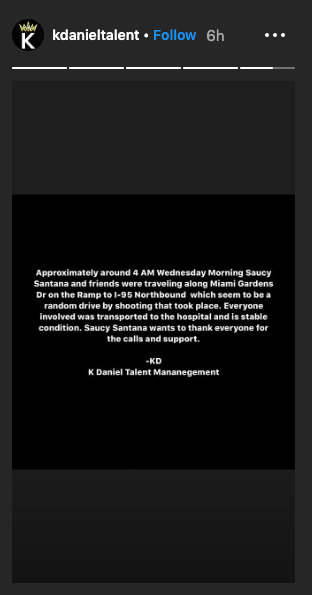 This isn’t the first shooting that has impacted Yung Miami this year. Fans might remember her car was also shot at while she was leaving the studio back in August, just a couple of months before giving birth to her daughter Summer.

Let’s continue to pray for everyone involved! 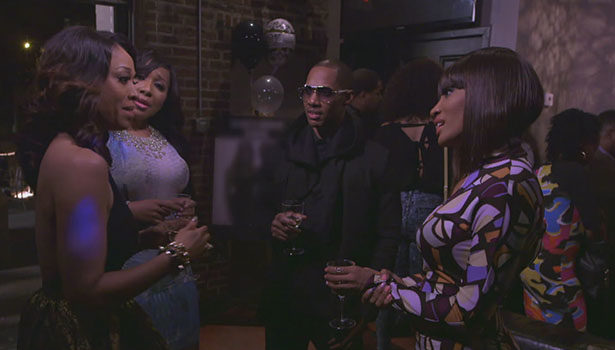