Cardi B is calling herself “the villain” after she defended her controversial comments concerning her support for other female rappers.

Her latest ordeal started when she said during an interview with XXL,

“If I like you, I’m gonna endorse you. If I like your music, I’m gonna tell you that I like your music. I’m not in no catty s*** but it’s like at the end of the day, it is what it is. Like, this could get a little bit catty. So, it’s like, I don’t want to feel like I have a responsibility to look out for the girls and coddle the girls and this and that. I feel like nobody did it for me, so it’s like, I don’t have to do it for you.”

“However, if you show me love, I’m going to show you love, and I’m gonna show you respect. Like, if you compliment me, I’ma compliment you. If you show love to my projects, I’m gonna show love to your projects. If sometimes, I see that you’re getting dragged on social media, like, I will want to give you advice like, ‘Girl, just don’t say nothing. Don’t worry about it. S***’s gonna pass. Yo, you know what? Do this so people could stop saying that about you.’ I’m a person that likes to give advice, but I’m not gonna give advice to just anybody because they’re a female. Like, at the end of the day, I came from a female industry. I came from the strip club. And I’m from New York. The women are just crazy two-faced.”

“I don’t have to look out for you just because you’re a woman. I’m going to respect you. As long as you show me respect. And if you ever ask me for advice, if you ever ask anything from me, I’m gonna give it to you. I’m gonna talk to you like a sister. When I met the City Girls, I didn’t know them at all. I told them like, ‘Y’all gotta keep working. Y’all gotta keep doing this. Y’all gotta keep doing that.’ And that’s exactly what they did. And they big artists. They’re really popular. That’s just advice that I would tell any woman. However, I don’t feel like I gotta embrace everybody ’cause you might embrace a b****, and then next thing you know, you find out the b****don’t even f***ing like you.

I don’t gotta have beef with somebody ’cause I’m not into beef. I hate beef. I’m not a petty person. I’m not a person that could go back and forth. I’m not none of that, ’cause I like to fight.”

After receiving criticism for her remarks, she tweeted in a message that has since been deleted.

“I DONT HAVE TO SUPPORT FEMALE RAPPERS HOWEVER I STILL DO IT. There’s a difference between having too and doing it cause I WANT TO.” 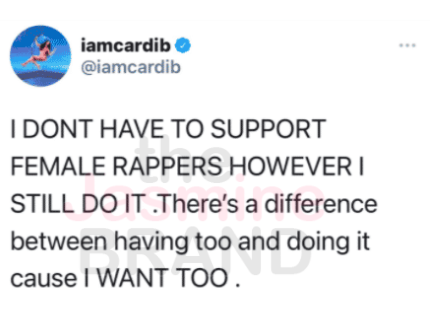 She also responded to a social media user who referenced her 2018 physical altercation with Nicki Minaj’s now-former friend Rah Ali, and denied the backlash against her is karma. 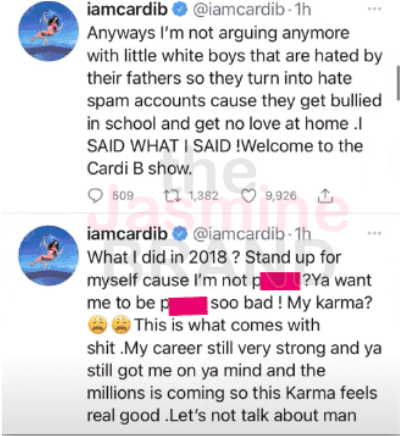 See more of her responses below. 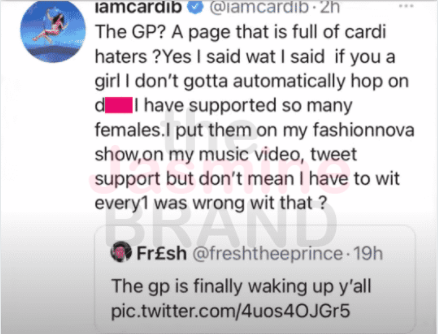 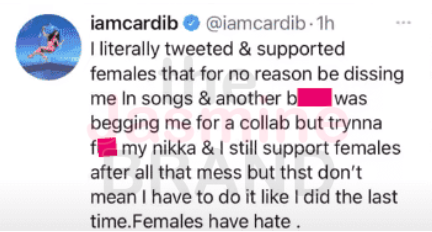 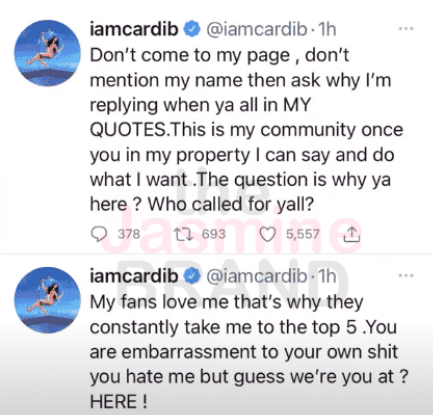 My twitter right now ????.You see I really be chillin then ya get me started and get ya own self mad ??? pic.twitter.com/54rCr9MtfI

She also responded to the hate after being a trending topic on Twitter, calling herself “the villain” as she walked around her bathroom in a revealing bathing suit.

What are your thoughts on Cardi B’s remarks? Comment and let us know. 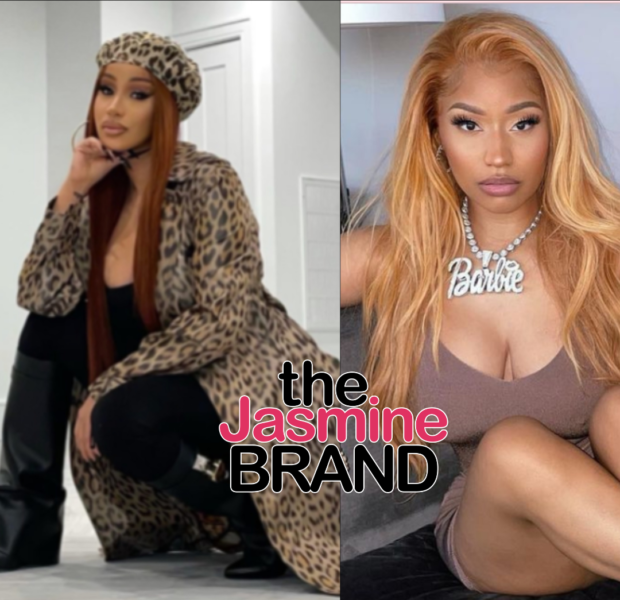 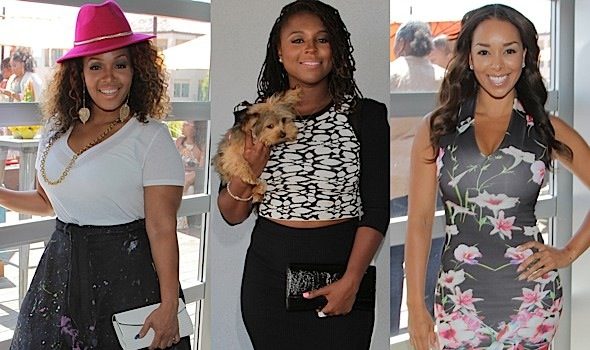