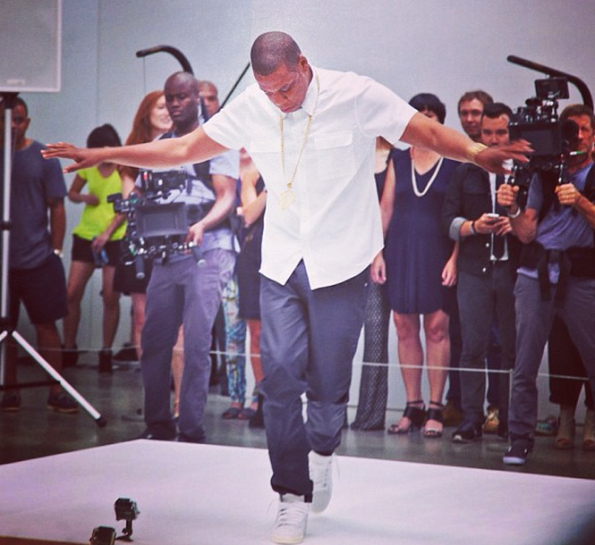 Finally, Jay-Z’s ‘Picasso Baby’ is here. On Friday, the Roc Nation CEO unveiled the video on HBO. Directed by Mark Romanek and produced by Timbaland, the 10 minute video provides more of an artistic approach to the creation of a video.

The day of the video shoot, Jay explains:

You’re in a smaller venue, it’s a bit more intimate. So you get to feel the energy of the people. Today, it’s kinda an exchange. We have somewhere to drop it back off.

When art started becoming part of the galleries, it became a separation of culture and even in hip-hop, people were like almost like artists to bourgeois. We’re artists. We’re alike. We’re cousins. Rap is pretty much thinking out loud.

The cameos were endless, including non famous folk, like a Black Belt kid, Titus Adkins (student), Radical Phoenix (performer), along with well known names in the art world like Judd Apatow (writer), Magazeen (dance hall artist), Adam Drive (actor), Fab Five Freddy, Rosie Perez and Taraji P Henson (actresses), Wale, Sandra Gering (art dealer), George Condo (artist) and a number of others.  After the performance, one of the attendees proclaimed to the camera:

You make yourself art. That’s amazing.

Check the performance below.

Nick Cannon Is Spending Christmas In the Hospital [VIDEO]