DJ Envy claims he was racially profiled by two New York state troopers while driving a loaner car he received from a Mercedes dealership. The Breakfast Club host shared his experience on Instagram within videos posted to his Story, detailing the interaction he had with the officer(s).

He said I wasn’t in my lane. No speeding, but not in my lane. And i just told myself, I ain’t get pulled over in a minute.So what happened is this is a loaner, they gave me a loaner with 10 miles on it. And they trying to figure out why I got a brand new car. They asked me 10 times where do I live, where I’m a going? Now they say the vin is not matching, these is some pooputs. Now they’re asking me, ‘Where do you work?’ I said, ‘I work in the city. I don’t have to tell you where I work.’

After being let go from the officers, he vents about what he wish he could have done.

I’m really mad cause I couldn’t curse him out. He threw the license and registration back in the car. I couldn’t even ask his name, I couldn’t curse him out. I really wish I was driving exotic so I could really sh*t, but I had the loaner. The guy said, ‘Where do you work?’ I said, ‘In the city.’ He said, ‘Where in the city?’ I said, ‘I told you in the city.’ He says, ‘I was just having conversation with you. N*gga, I don’t want to have conversation with you!

#DJEnvy was pulled over last night, claims he was racially profiled. Then checks a fan for trying to justify what the officers did ***SWIPE***

Following the posting, Envy attempted to have conversation with a follower who disagreed with how he thought  the officer handled the situation. The radio personality shared the direct message exchange to his Instagram feed, captioning the image,

See… This is the problem… Instead of asking envy what happened… The 1st thing he said was, Envy you are wrong… We need more officers, judges, district attorneys, correction officers etc. to stand up for their community.. He had me on the side of the road for 30min and even called a tow truck because ‘I wasn’t in my lane…’ See I was in a loaner, it was a 2019 benz… It has an option where the car stays in the lane for you.. I’m just tired of the bullshit… I’d rather them just say, 2 blacks in a car we wanna make sure the car is not stolen… Be upfront with your racism.. and This officer @cj.santi doesn’t seem bad just uninformed.. Happy Holidays!! Back to work now!!!

Check the full exchange below. 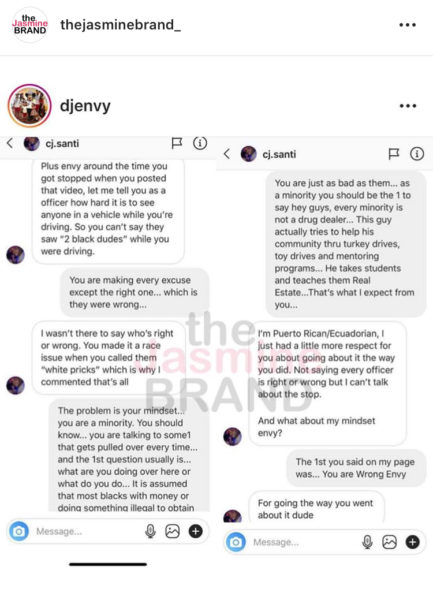 R.Kelly – Woman Who Helped Him Get Out Of Jail Speaks Out: He’s My Friend, He’s NOT A Monster!
Exclusive
Post Slider